#PopeFrancis "...the young people of the world received the message of Mercy" FULL TEXT Audience + Video 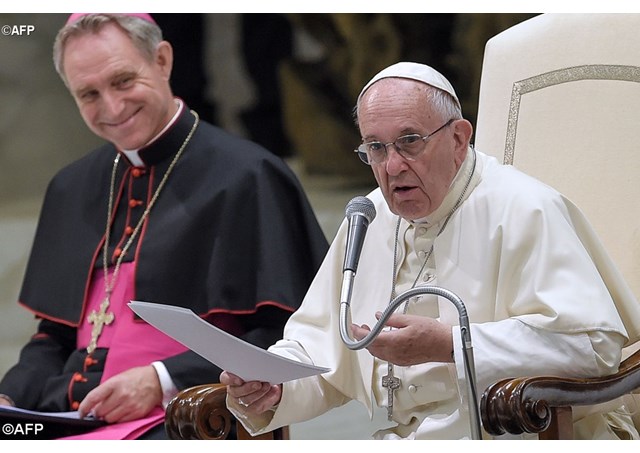 Greeting in Italian
Dear Italian-speaking faithful, welcome! I am happy to receive the young musicians and dancers of the Folklore Festival of Cori; the pilgrims of the Saint Benedict and Saint Francis Walk of the Diocese of Frosinone-Veroli-Ferentino and the members of the Solidarity Center of Pesaro. May the visit to the tombs of the Apostles Peter and Paul, on the occasion of the Jubilee of Mercy, nourish in all faith and commitment in concrete works of charity.
A particular greeting goes to young people, the sick and newlyweds. Tomorrow we celebrate the Memoria of Saint John Mary Vianney, Patron of priests and especially of parish priests. May his great humility be an example for you, dear young people, to live life as gift of God; may his confident abandonment in Christ the Savior sustain you, dear sick, in the hour of suffering; and may his Christian testimony give courage to you, dear newlyweds, to profess your faith without shame.
Tomorrow I will go to the Papal Basilica of Saint Mary of the Angels, at the Porziuncola, on the occasion of the eighth centenary of the “Pardon of Assisi,” which was observed yesterday. It will be a very simple but very significant pilgrimage in this Holy Year of Mercy. I ask all to accompany me with prayer, invoking the light and strength of the Holy Spirit and the heavenly intercession of Saint Francis.
[Original text: Italian] [Translation by ZENIT]
Posted by Jesus Caritas Est at 11:58 AM