#PopeFrancis "..., if our own Christian life has always opened the road to Jesus.." #Advent #Homily 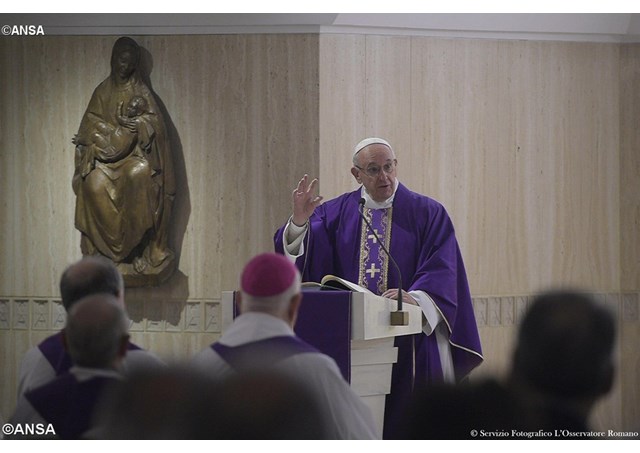 (Vatican Radio) Christians should look to the “great” John the Baptist as a model of humble witness to Jesus, as one who denies himself, even to the point of death, in order to point out the coming of the Son of God. That was Pope Francis’ message, during the morning Mass at the Casa Santa Marta, to Bishops and religious celebrating the 50th anniversary of their ordination, and to married couples celebrating the 50th anniversary of their wedding vows.
John the Baptist, the witness who points to Christ
The Church’s liturgy turns once again, as it has in the past two days, to the figure of St John the Baptist, presented in the Gospel as the “witness.” His vocation, the Pope explained in his homily, is “to give witness to Jesus,” “to point out Jesus,” like a lamp with respect to the light:
A lamp that points out where the light is, that bears witness to the light. He was the voice. He said of himself: “I am the voice that cries out in the desert.” He was the voice but that bears witness to the Word, points out the Word, the Word of God, the Word. He was only the voice. The Word. He was the preacher of penitence who baptized, the Baptist, but he makes it clear, he says clearly: “After me comes another who is mightier than I, who is greater than I, whose sandals I am not worthy to untie. And He will baptize you in fire and the Holy Spirit.”
The humility of John, his self-annihilation is a model for Christians
John, then, is the “place-holder who points out the definitive figure”; and the definitive figure is Jesus. This, the Pope said, “is his greatness,” which was demonstrated each time the people and the doctors of the law asked him whether or not he was the Messiah, and he clearly responded, “I am not he”:
And this provisional but certain, strong testimony; that torch that was not put out by the wind of vanity; that voice that was not diminished by the force of pride; always becomes one that indicates the other and opens the gate to the other testimony, that of the Father, that which Jesus speaks of today: “But I have a testimony greater than that of John: that of the Father. And John the Baptist opens the gate to this testimony.” And the voice of the Father is heard: “This is my Son.” It was for John to open this gate. And this John was great, always left aside.
John is humble, he “annihilates himself,” the Pope emphasized once again, he takes the same road that Jesus would take later, that “of emptying himself.” And it will be thus until the end: “in the darkness of a cell, in prison, beheaded because of the whim of a dancing girl, the envy of an adulteress, the weakness of a drunkard.” If we have to paint a portrait, Francis is of the mind that “this alone is how we must depict it.” This is an image that the Pope then offered to the faithful present, including religious and bishops celebrating their jubilees, and married couples celebrating their 50th wedding anniversaries.
Christians by their lives should open the road to Jesus
It is a beautiful day to question ourselves about our own Christian life, if our own Christian life has always opened the road to Jesus, if our own life was full of this act: pointing out Jesus. Giving thanks for the many times that they did it, giving thanks and beginning anew, after the fiftieth anniversary, with this aged youth or this youthful age – like the good wine! – taking a step forward in order to continue to be witnesses of Jesus. May John, the great witness, help you in this new path that you are beginning today, after the celebration of the fiftieth anniversary, of priesthood, of consecrated life, and of matrimony.