#PopeFrancis "To believe, it is necessary to be able to see with the eyes of faith..." #Angelus FULL TEXT + Video 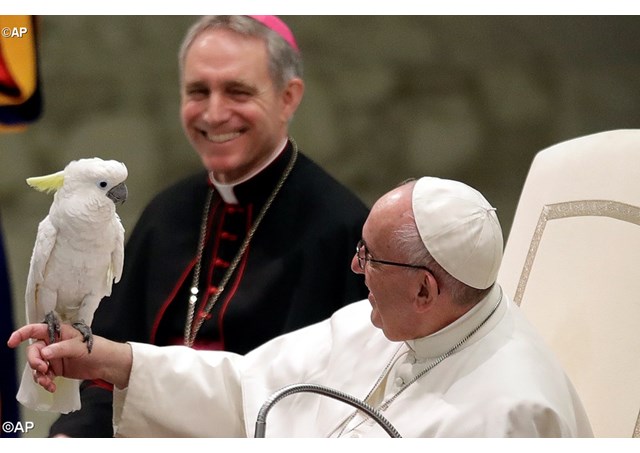 THE HOLY FATHER’S CATECHESIS
Dear Brothers and Sisters, good morning!
In his Letter to the Romans, Saint Paul recalls for us the great figure of Abraham, to indicate to us the way of faith and hope. Of him, the Apostle writes: “In hope he believed against hope, that he should become the father of many nations” (Romans 4:18); “firm in hope against all hope.” This concept is strong: and even when there is no hope, I hope. So is our Father Abraham. Saint Paul is referring to the faith with which Abraham believed in the word of God, who promised him a son. But it was truly a trust hoping “against hope,” so unlikely was what the Lord announced to him, because he was elderly — he was almost one hundred years old — and his wife was sterile. He was unable, but God said it and he believed. There was no human hope because he was elderly and his wife was sterile: but he believed.
Trusting in this promise, Abraham starts out, accepts leaving his land and becoming a foreigner, hoping in this “impossible” son that God wished to give him despite Sarah’s womb being now as dead. Abraham believed; his faith opened to a hope that seemed unreasonable; that is, the ability to go beyond human reasoning, the wisdom and prudence of the world, beyond what is normally regarded a good sense, to believe in the impossible. Hope opens new horizons, makes one capable of dreaming what is not even imaginable. Hope makes one enter the darkness of an uncertain future to walk in the light. The virtue of hope is beautiful; it gives us so much strength to walk in life.
However, it is a difficult way. And the moment of the crisis of dejection came also for Abraham. He trusted, he left his home, his land, his friends … everything. He left and arrived in the country that God had indicated to him; time passed. At that time, to undertake such a trip was not as today with airplanes – now it is done in a few hours; then it took months, years! Time passed, but the <promised> son did not come; Sarah’s womb remained closed in its sterility.
And Abraham — I do not say that he lost patience but he complained to the Lord. We learn this also from our Father Abraham: to complain to the Lord is a way of praying. Sometimes I feel when I confess that I have complained to the Lord …” and [I answer]: “but no! Do complain, He is a Father!” And this is a way of praying: complain to the Lord, this is good. Abraham complained to the Lord saying: “’ Lord God, […], I am leaving without children and the heir of my house is Eliezer of Damascus” (Eliezer was the one who governed everything). Abraham added: “Behold, you have not given me descendants and my slave will be my heir.” And behold, this word of the Lord was addressed to him: ‘He shall not be your heir; but one born of you shall be your heir.” And then He led him outside and said, ‘Look toward heaven, and number the stars, if you are able to number them’; and He added: ‘So shall your descendants be.’ And yet again Abraham believed the Lord; and he reckoned it to him as righteousness” (Genesis 15:2-6).
The scene unfolded at night; outside it was dark, but in Abraham’s heart there was also the darkness of disappointment, of discouragement, of difficulty in continuing to hope in something impossible. By now, the Patriarch was very advanced in years, there seemed to be no more time for a son, and it will be a slave who will take over, inheriting everything.
Abraham is addressing the Lord, but God, although He is present there and speaks with him, seems as though He is distancing Himself, as if <Abraham> had not had faith in His word. Abraham feels alone, he is old and tired, death looms. How can he continue to trust?
Yet, his lament is already a form of faith, it is a prayer. Despite everything, Abraham continues to believe in God and to hope that something can still happen. Otherwise, why question the Lord, why complain to him, why remind Him of His promises? Faith is not only silence, which accepts everything without replying; hope is not certainty that makes one immune to doubt and to perplexity. But so often, hope is darkness; but hope is there … which leads one forward. Faith is also to struggle with God, to show Him our bitterness, without “pious” pretenses. “I was angry with God and I said this and this and this to Him … But He is a Father, He has understood you: go in peace! One must have this courage! And this is hope. And hope is also not to be afraid to see reality for what it is and to accept its contradictions.
Therefore, Abraham turns to God in faith to help him continue to hope. It is curious; he does not ask for a son. He asks: “Help me to continue to hope,” the prayer to have hope. And the Lord responds insisting on His unlikely promise: a slave will not be the heir but in fact a son, born of Abraham, generated by him. Nothing has changed on God’s part. He continues to confirm what He already said, and he does not offer footholds to Abraham to feel reassured. His only security is to trust in the Lord’s word and to continue to hope.


And that sign that God gives to Abraham is a request to continue to believe and to hope: “Look toward heaven and number the stars […] So shall your descendants be” (Genesis15:5). It is, again, a promise; it is something to wait for in the future. God leads Abraham out of the tent, in reality out of his narrow visions, and He shows him the stars. To believe, it is necessary to be able to see with the eyes of faith, they are only stars, which all can see, but for Abraham they must become the sign of God’s fidelity.
This is faith; this is the way of hope that each one of us must follow. If for us also the only possibility remains to look at the stars, then it is time to trust God. There is nothing more beautiful. Hope does not disappoint. Thank you.
[Original text: Italian] [Working Translation by ZENIT]

In Italian
I receive with the joy of the Christmas atmosphere the dear Italian-speaking pilgrims. I greet the artists and workers of the Golden Circus of Liana Orfei, and I thank them for their pleasing exhibition. Beauty always brings us closer to God! I greet the parish groups, particularly the faithful of Supino and of Sant’Andrea delle Frate in Rome, who have come with the effigy of Our Lady of the Miraculous Medal, which will be exhibited in Saint Peter’s Basilica. In this Christmastide we have before our eyes the wonderful mystery of Jesus, child and adolescent, who, as the evangelist Luke recounts, “increased in wisdom and in stature, and in favor with God and man.” (2:52).
It gives me pleasure to express a special greeting to young people, the sick and newlyweds, I call them the courageous ones, because one needs courage to marry and to do so for the whole of life: good ones. May the Holy Innocent Martyrs, whom we remember today, help us all to be strong in faith, looking at the divine Child, who in the mystery of Christmas offers himself for the whole of humanity. Dear young people, may you also be able to grow like Him: obedient to parents and quick to understand and follow the will of the Father who is in heaven. Dear sick, I hope you can discern, in the vivid light of Bethlehem, the meaning of your suffering. And I exhort you, dear courageous newlyweds, in building your family to keep love and dedication constant, beyond all sacrifice, and not to end your day without making peace between you.
[Original text: Italian] [Working Translation by ZENIT]
>