#PopeFrancis "...persevere in prayer, so that Jesus’ desire is fulfilled: “That they may all be one” #Angelus FULL TEXT + Video 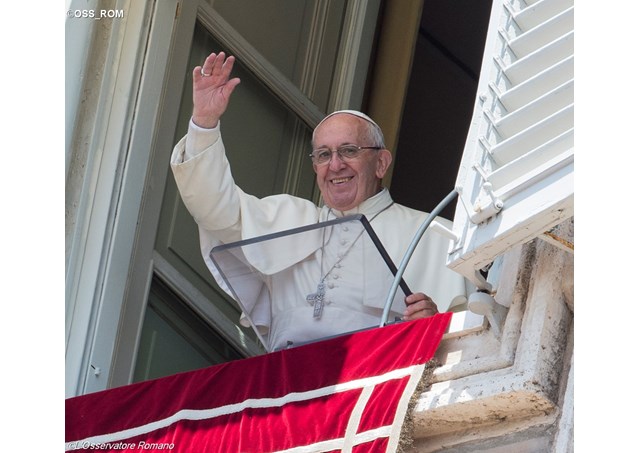 Dear brothers and sisters, good morning!
Today’s evangelical page (cf. Matthew 4:12-23) recounts the beginning of Jesus’ preaching in Galilee. He leaves Nazareth, a village over the hills, and dwells in Capernaum, an important center on the shore of the Lake, inhabited to a great extent by pagans, a crossroads between the Mediterranean and the Mesopotamian hinterland. This choice indicates that the recipients of His preaching were not only his fellow countrymen, but all those dwelling in cosmopolitan “Galilee of the Gentiles” (v. 15; cf. Isaiah 8:23): so it was called. Seen from Jerusalem, the capital, that land is geographically on the periphery and religiously impure, because it was full of pagans, given the mixture with all those who did not belong to Israel. Great things for the history of salvation were certainly not expected from Galilee. Instead, it was precisely from there that that “light” was diffused, on which we meditated in past Sundays: the light of Christ. It spread in fact from the periphery.
Jesus’ message reiterated that of the Baptist, proclaiming the “Kingdom of Heaven” (v. 17). This Kingdom does not imply the establishment of a new political power, but the fulfilment of the Covenant between God and His People, which will inaugurate a season of peace and justice. Each one is called to be converted, to solidify this Covenant pact with God, transforming his way of thinking and of living. This is important: to be converted is not only to change one’s way of living, but also one’s way of thinking. It is a transformation of thought. It is not about changing garments but habits! What makes Jesus differ from John the Baptist is the style and the method. Jesus chooses to be an itinerant prophet. He does not wait for the people, but goes to encounter them. Jesus is always on the way! His first missionary outings took place along the Lake of Galilee, in contact with the crowd, in particular with fishermen. Not only does Jesus proclaim the coming of the Kingdom of God there, but seeks companions to associate to His mission of salvation. In this same place He meets two sets of brothers: Simon and Andrew, James and John. He calls them, saying: “Follow me, and I will make you fishers of men” (v. 19). The call reaches them in the midst of their everyday activity: the Lord reveals Himself to us not in an extraordinary or striking way, but in the everyday of our life. We must find the Lord there; and He reveals Himself there, makes our heart feel His love; and there — with this dialogue with Him in the everyday of our life — our heart changes. The response of the four fishermen is immediate and prompt: “Immediately they left their nets and followed Him” (v. 20). We know, in fact, that they had been disciples of the Baptist and that, thanks to his testimony, they had already begun to believe in Jesus as Messiah (cf. John 1:35-42).
We, today’s Christians, have the joy of proclaiming and witnessing our faith because there was that first proclamation, because there were those humble and courageous men who responded generously to Jesus’ call. The first community of Christ’s disciples was born on the shores of the Lake, in an unthinkable land. May the awareness of these beginnings arouse in us the desire to take the Word, the love and tenderness of Jesus to every context, even the most impervious and resistant. To take the Word to all the peripheries! All areas of human living are terrain in which to sow the seed of the Gospel, so that it bear fruits of salvation.
May the Virgin Mary help us, with her maternal intercession, to respond with joy to Jesus’ call, and to put ourselves at the service of the Kingdom of God.

*
After the Angelus
Dear brothers and sisters,
We are in the Week of Prayer for Christian Unity. Its theme this year is an expression, treated by Saint Paul [Pablo], which points out the way to follow. And it says thus: “The love of Christ spurs us to reconciliation” (cf. 2 Corinthians 5:14). We will end the Week of Prayer next Wednesday with the celebration of Vespers in the Basilica of Saint Paul-outside-the Walls, in which brothers and sisters of the other Christian Churches and Communities present in Rome will take part. I invite you to persevere in prayer, so that Jesus’ desire is fulfilled: “That they may all be one” (John 17:21).
In past days, an earthquake and heavy snowfalls have again put many of our brothers and sister of Central Italy to a harsh test, especially in Abruzzo, Marches and Lazio. With prayer and affection I am close to the families that have had victims among their dear ones. I encourage all those who are committed with great generosity in the works of rescue and assistance, as well as the local Churches, which are spending themselves to alleviate the sufferings and difficulties. Thank you so much for this closeness, for your work and the concrete help you bring. Thank you! And I invite you to pray together to Our Lady for the victims and also for those who with great generosity are committed in the works of rescue.
[Recitation of the Hail Mary]
In the Far East and in several parts of the world, millions of men and women are preparing to celebrate the lunar New Year on January 28. May my warm greeting reach all their families, with the wish that they become increasingly a school in which one learns to respect the other, to communicate and look after one another in a selfless way. May the joy of love be propagated within families and from them radiate to the whole of society.
I greet you all, faithful of Rome and pilgrims from various countries, in particular the group of youngsters of Panama and the students of the “Diego Sanchez Institute of Talavera la Real (Spain).
I greet the members of the Catholic Union of Teachers, Directors, Educators and Formators, who have concluded their 25th National Congress, and I wish them fruitful educational work, in collaboration with families — always in collaboration with families!
I wish you all a good Sunday and, please, do not forget to pray for me. Have a good lunch and see you soon!
[Original text: Italian]  [Translation by ZENIT]