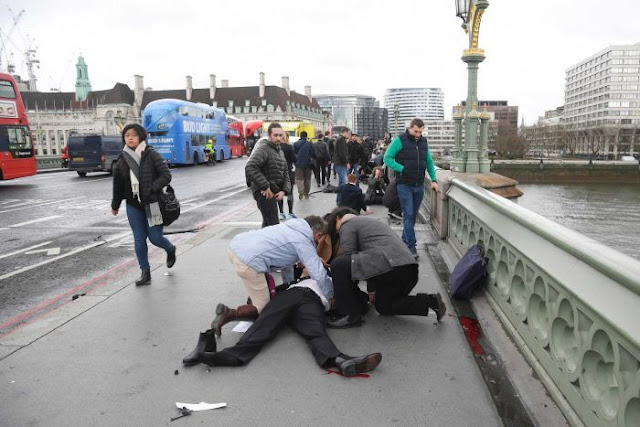 A man identified as Khalid Masood, 52, is behind the deadly attacks Wednesday in London outside Britain's Parliament. This killed four people, including a police officer, outside the UK Parliament on Wednesday. The British police called it an act of "Islamist-related terrorism." 40 people were hurt when the attacker slammed his car through a crowd of people on a bridge over the River Thames. Masood then got out of his vehicle and fatally stabbed police officer Keith Palmer. Palmer, aged 48 and a father, was a 15-year-veteran who was unarmed, on the grounds of Parliament. An armed officer shot the assailant dead. The vehicle hit many  people, including three police officers. "The man -- armed with a knife -- continued the attack, tried to enter Parliament.  London Mayor Sadiq Khan said: "My heart goes out to those who have lost loved ones and to everyone who has been affected," he said, paying tribute to the emergency services. He announced the deployment of additional armed officers on the streets of the British capital. "We stand together in the face of those who would seek to harm us and destroy our way of life," he added

Vatican Radio - Pope Francis has sent a telegram expressing his condolences to the victims of the terror attack at the House of Parliament in London on Wednesday, in which an attacker killed four people before armed police shot him dead.
Addressed to the Archbishop of Westminster, Cardinal Vincent Nichols, and signed by the Cardinal Secretary of State, Pietro Parolin, the telegram conveys the Holy Father's promises of prayers and spiritual closeness to the grieving families, as well as his spiritual solidarity with the whole people.
Below, please find the full text of the Telegram, in English
******************************************
His Eminence Cardinal Vincent Nichols
Archbishop of Westminster
President of the Bishops’ Conference of England and Wales
Deeply saddened to learn of the loss of life and of the injuries caused by the attack in central London, His Holiness Pope Francis expresses his prayerful solidarity with all those affected by this tragedy.  Commending those who have died to the loving mercy of Almighty God, His Holiness invokes divine strength and peace upon their grieving families, and he assures the nation of his prayers at this time.