#PopeFrancis "Let us never forget that mercy is the keystone in the life of faith, ...which we give visibility to the resurrection of Jesus." FULL Video - Divine Mercy Sunday 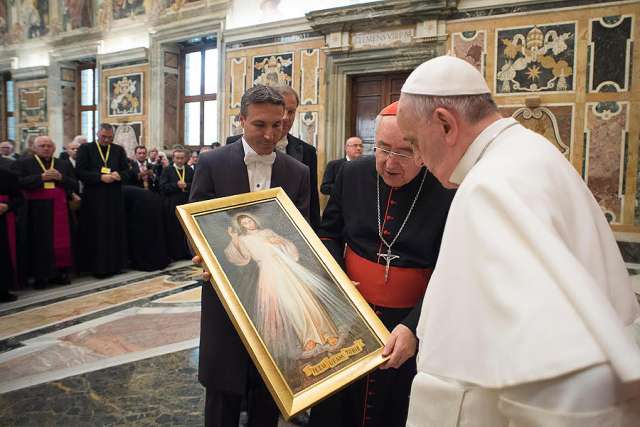 Pope: Mercy is a form of knowledge that opens the door of the mind and heart

On the Sunday of Divine Mercy, established by Saint John Paul II, Francis reiterated the importance of the experience of mercy, "the concrete form in which we give visibility to the resurrection of Jesus". He also explained the meaning of Sunday ‘in Albis’, and thanked those who sent him Easter greetings.
Vatican City (AsiaNews) – Mercy is "a true form of knowledge of the mystery we experience," Pope Francis said today, Sunday of the Divine Mercy, the second of Easter, before he recited the Regina Caeli with the pilgrims in St Peter's Square.
The pontiff noted that, inspired by the Holy Spirit, Saint John Paul II established a special celebration of the Divine Mercy on this Sunday to remember the time when Jesus appeared to the disciples after his resurrection, giving them the power of reconciliation (cf. Jn 20: 19-31).
Pope Francis had stressed the importance of this theme in the life of the Church and the world when he convened the Jubilee of Mercy that ended last November.
"Saint John writes that Jesus, after greeting his disciples, said to them, ‘As the Father has sent me, so I send you. he breathed on them and added, ‘Receive the holy Spirit. Whose sins you forgive are forgiven them’ (Jn, 20-21-23). This is the meaning of mercy that occurs on the day of the resurrection of Jesus as [the act of] forgiving the sins. The Risen Jesus passed on to his Church, as its first task, his own mission to bring the concrete announcement of forgiveness to everyone. This visible sign of his mercy brings with him the peace of the heart and the joy of the renewed encounter with the Lord.”
"We know," Francis went on to say, "that this is known through so many forms: the senses, intuition, reason, and so on. Well, we can also know it through the experience of mercy! The latter opens the door of the mind to a better understanding of the mystery of God and of our personal existence. It makes us understand that violence, rancour, revenge make no sense, and that the first victim of this are those who experience these feelings because it deprives them of their dignity. Mercy also opens the door of the heart and allows us to express closeness, especially with those who are alone and marginalised, because it makes them feel like brothers and sisters and children of one Father."

"It favours the recognition of those who need consolation and provides the right words to give comfort. Mercy warms the heart and makes it sensitive to the needs of one’s brothers and sisters through sharing and participation. Mercy, in short, commits everyone to be instruments of justice, reconciliation and peace. Let us never forget that mercy is the keystone in the life of faith, and the concrete form in which we give visibility to the resurrection of Jesus."
Earlier, Francis explained why this Sunday is called in Albis. "The expression was meant to draw attention to the rite performed by those who received baptism during Easter Vigil. Each of them was given a white robe - alba - to indicate the new dignity of the children of God. Even today babies receive a small symbolic garment whilst adults wear a real one. In the past, the white robe was worn for a week, until Sunday in albis [deponenda], when it was removed, and the new members began their new life in Christ and the Church.
After the Marian prayer of Easter time, the pope thanked "all those who sent me Easter greetings. I reciprocate with all my heart by invoking for each of them and for every family the grace of the Risen Lord." (Text shared from AsiaNewsIT)