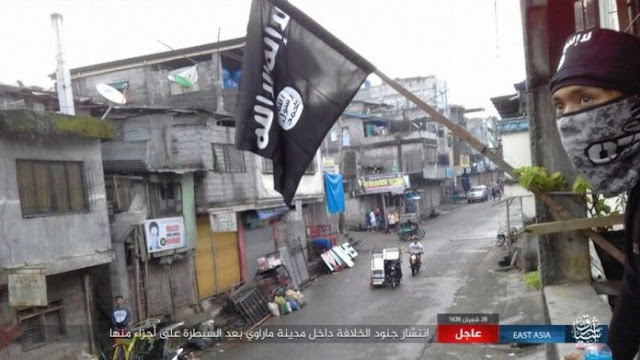 Marawi city (Agenzia Fides) - "There are no negotiations. The army is engaged in door-to-door combat to regain the city of Marawi. And military leaders say they do not intend to negotiate with terrorists. We are seriously concerned about Fr. Chito, Fr. Suganob, and the other 15 hostages taken by terrorists. We do not know where they are. I do not think the kidnappers want money, but they intend to use them to save their lives. I fear they will use them as human shields": said to Agenzia Fides Bishop Edwin de la Pena, who heads the territorial prelature of Marawi city, a city on the island of Mindanao (southern Philippines) attacked and taken three days ago by terrorists of the "Maute" Islamic group. The militants broke into the cathedral and kidnapped the vicar of the bishop and the faithful gathered in prayer, then set fire to the building.
The Bishop also confirms to Fides the killing of nine Catholic faithful, who were stopped, tied and then killed at the gates of the city. "They are violent extremists, we do not know what they have in mind. We are in God's hands", he says.
The over 500 terrorists who entered the city have hoisted the black flags of the Islamic State, burned two schools and released prisoners from the local jail. Then they broke into houses, while the Philippine army have begun to lay siege to free the city. Most of the population has been evacuated but some families have locked themselves in their homes.
Meanwhile, the entire Catholic Catholic community has launched a prayer campaign for the release of the hostages. Cardinal Orlando Quevedo, Archbishop of Cotabato, a city also on the island of Mindanao, said: "Let us pray for the salvation of the hostages. We appeal to the kidnappers' conscience not to kill innocent people", he said, also asking for the help of Muslim leaders in Mindanao to try to solve the crisis of the hostages peacefully.
Even the Cardinal of Manila, Luis Antonio Tagle, expressed solidarity with the people of Marawi: "There are no words to express the pain and bitterness we feel. Why hurt innocents? We are very worried". The entire Philippine Church with bated breath has launched the appeal "PrayforMarawi" also spread over the social media.
In the meantime the Martial Law proclaimed by Philippine President Rodrigo Duterte remains in force on the island of Mindanao, which gives special powers to the armed forces to maintain political and social order. (PA) (Agenzia Fides 26/5/2017)

Anonymous said…
Eternal rest give onto the dearly departed Father. May they rest in peace. We pray in Jesus' name as he told us to do and we believe in his promise that you will hear us Father, let your will on earth be done as it is in heaven. Give us this day our daily bread and forgive our trespasses as we forgive those who are persecuting us because we believe that Jesus is in the Father and the two are one God. We pray that together with the holy spirit our faithfulness will be rewarded with mercy and peace here on earth. Amen.
May 26, 2017 at 9:57 PM

Anonymous said…
I pray to Our Lord Jesus Christ to take care of all our Catholic Brothers and Sisters and to Our Lady of Guadalupe to embrace them with faith and love. O God, please save everybody's lives.
May 28, 2017 at 12:03 AM

Tim said…
Praise the Lord, but pass the Ammunition is a phrase by a Chaplain to rally the sailors during the Japanese sneak attack on Pearl Harbor. No negotiations. These Evil Beings will possibly think twice the next time. The Knights Templar minced no words
May 28, 2017 at 2:12 PM