#PopeFrancis "'Why do children suffer?', and I don't find any explantion,..I only look at the crucifix and stand still there." at Hospital - FULL Video 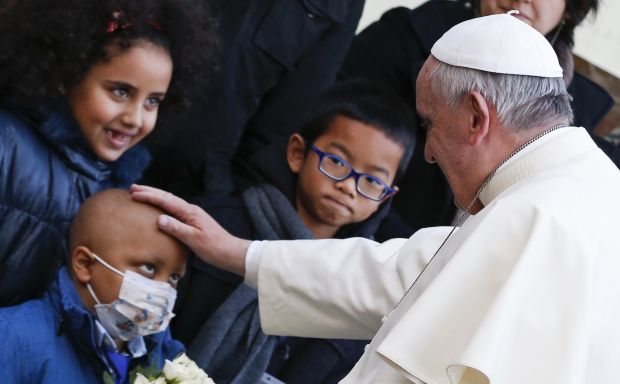 Radio Vaticana report: “Faith works primarily through charity and without it, it is dead. So I encourage you to carry out your delicate work motivated by charity", said Pope Francis  to the staff members of  “Giannini Gaslini” Pediatric Hospital during his day long visit to the Italian city of Genoa on Saturday.
The Pope said that he couldn’t miss this visit where children are cared for, because the suffering of children is certainly something very difficult to accept. And added that  it is there that the Lord called him to be,  though briefly, close to the children and their relatives.  "Often and again I ask myself: 'Why do children suffer?', and I don't find any explantion," the Pope said.  "I only look at the crucifix and stand still there."
Pope Francis commended the devoted service of the hospital staff, the President of the Foundation, the Archbishop of Genoa, physicians, paramedics,  the various specialized staff, as well as the Cappucchin Friars Minor and all those who assist and help the children with love and dedication and said that they in fact also need their  gestures of friendship, of  understanding, of affection and paternal and maternal support.
This institute is an act of love of Senator Gerolamo  Gaslini he said who in honour of his daughter who died of a tender age had founded the hospital by sacrificing all he had: companies, establishments, property, money, and even his home. This is why this hospital is known and appreciated in Italy and around the world and has a special role of continuing to be a symbol of generosity and solidarity he said.   In founding of the Hospital he observed, Gaslini said: "It is my firm will that this Institute has the Catholic faith as its foundation and guide [...] that it ferments every activity and comforts every pain." The pope called them to  often think of the "good Samaritan" of the Gospel- attentive to the needs of their small patients, accepting tenderly  their fragility, and seeing the Lord in them. Whoever serves the sick with love serves Jesus who opens the Kingdom of Heaven he affirmed.
The Pope hoped that the Hospital, faithful to its mission, will continue its appreciated work of care and research through the generous and disinterested contribution and contribute to all categories and at all levels. He concluded assuring the staff, patients and their relatives of his prayer and blessings.
Earlier on Wednesday linking-up live via telephone to a parish radio in Genova that broadcasts a Wednesday weekly programme especially dedicated to the children’s hospital, Pope Francis told the little patients that it is with joy that he is preparing to be with them.
"Istituto Giannina Gaslini" is a tertiary level pediatric hospital affiliated to the University of Genoa and  is considered one of the foremost children’s hospitals in Europe and is formally recognized as a Scientific Institute for Research, Hospitalization and Healthcare.