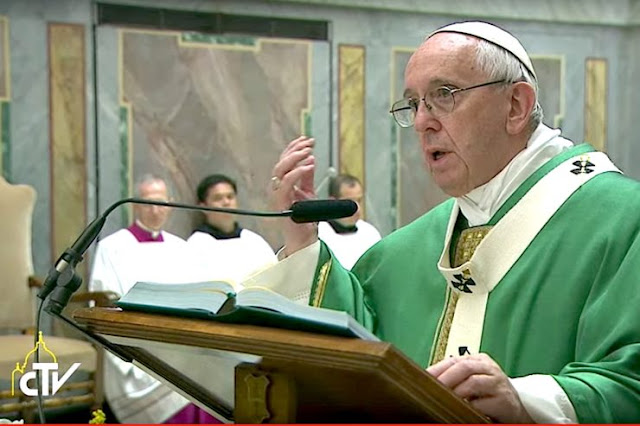 Pope Francis celebrated Mass on Tuesday June 27, 2017 in the Pauline Chapel of the Apostolic Palace, with the members of the College of Cardinals present to mark the 25th jubilee of his ordination to the episcopacy.

The Holy Father’s Homily
In the first Reading, we heard how the dialogue continues between God and Abraham, that dialogue that began with that “Go. Go from your country . . .” (Genesis 12:1). And in this continuation of the dialogue, we find three imperatives: “Rise!” “Look!” “Hope!” Three imperatives that mark the way that Abraham must undertake and also the way to do it, the interior attitude: rise, look, hope.
“Rise!” Rise, walk, do not be still. You have a task, you have a mission and you must carry it out on the way. Do not stay seated: rise; stand up. And Abraham began to walk, always on the way. And the symbol of this is the tent. The Book of Genesis says that Abraham went with the tent, and when he stopped, the tent was there. Abraham never made a house for himself while there was this imperative: “Rise!” He only built an altar, the only thing, to adore Him who ordered him to rise, to be on the way, with the tent. “Rise!”
“Look!” Second imperative. “Lift up your eyes, and look from the place where you are, northward and southward, eastward and westward” (Genesis 13:14). Look. Look at the horizon; do not build walls. Look always and go on. And the mysticism [the spirituality] of the horizon is that the more one goes on the horizon is always farther. Push the look, push it forward, walking, but towards the horizon.
Third imperative: “Hope!” There is that beautiful dialogue: “[Lord], you have given me so much, but the heir will be this slave” – “The heir will issue from you, will be born of you. Hope!” (Cf. Genesis 15:3-4). And this, said to a man who could not have heredity, be it because of his age, be it because of his wife’s sterility. But he will be “of you.” And your heredity – of you – will be “as the dust of the earth: if one can count the dust of the earth, you will also be able to count your descendants” (Genesis 13:16). And a bit further one: “Lift up your eyes, look at the sky: count the stars, if you can. So shall be your descendants.” And Abraham believed, and the Lord credited it to him as righteousness (Cf. Genesis 15:5-6). With Abraham’s faith begins that righteousness that [the Apostle] Paul would carry forward with the explanation of justification.
“Rise! Look! – the horizon, no walls, the horizon – Hope!” And hope is without walls, it is pure horizon.
However, when Abraham was called he was more or less our age: he was about to retire, to retire to rest . . . He started out at that age. An elderly man, with the weight of old age, that old age that brings pains, sicknesses . . . But you, as if he were a youth, rise, go, go! As if he wee a scout: go! Look and hope. And this Word of God is also for us, who are of Abraham’s age . . . more or less – there are some young men here, but the majority of us are of this age; and today the Lord says the same to us: “Rise! Look! Hope!” He tells us that it is not the hour to close our life, not to close our history, not to abridge our history. The Lord tells us that our history is still open: it is open to the end; it is open with a mission. And with these three imperatives He indicates to us the mission: “Rise! Look! Hope!”
Someone who does not love us says of us that we are the gerontocracy of the Church. It is a mockery. He doesn’t understand what he says. We are not the aged, we are grandfathers, we are grandfathers. And if we do not feel this, we should ask for the grace to feel it — grandfathers whose grandchildren look at them, Grandfathers who must give them a sense of life with our experience. Grandfathers not closed in the melancholy of our history, but open to give this. And for us, this “rise, look, hope,” is called “to dream.” We are grandfathers called to dream and to give our dream to today’s youth: they need it, because they will draw from our dreams the strength to prophesy and to carry their task forward.
There comes to mind that passage of Luke’s Gospel (2:21-38), Simeon and Anna: two grandparents, but what capacity to dream these two had! And they told this whole dream to Saint Joseph, to Our Lady, to the people . . . And Anna went gossiping here and there and said: “It is He! It is He!” and she told the dream of her life. And this is what the Lord asks of us today: to be grandparents. To have the vitality to give to young people, because young people expect it from us; not to close ourselves but to give our best: they expect from our experience, from our positive dreams to take forward the prophecy and the work.
I ask the Lord to give all of us this grace, also for those that have not yet become grandfathers: we see the President [of the Bishops] of Brazil, he is a youth, . . . but he’ll catch up! The grace to be grandparents, the grace to dream, to give this dream to our young people: they need it.
[At the end of the Mass, before the blessing]

I want to thank you all for the words addressed to me by Cardinal Sodano, Dean, with the new Vice-Dean who is beside him – all good wishes! – I want to thank you for this common prayer on this anniversary, asking forgiveness for my sins and perseverance in faith, in hope, in charity. I thank you so much for this fraternal company and I ask the Lord to bless you and accompany you on the path of service to the Church. Thank you so much.
[Original text: Italian] [ZENIT-Translation by Virginia M. Forrester]