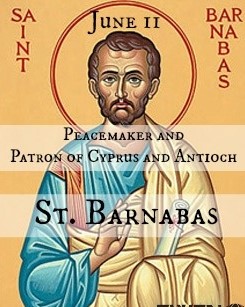 arnabas (originally Joseph), styled an Apostle in Holy Scripture, and, like St. Paul, ranked by the Church with the Twelve, though not one of them; b. of Jewish parents in the Island of Cyprus about the beginning of the Christian Era. A Levite, he naturally spent much time in Jerusalem, probably even before the Crucifixion of Our Lord, and appears also to have settled there (where his relatives, the family of Mark the Evangelist, likewise had their homes — Acts 12:12) and to have owned land in its vicinity (4:36-37). A rather late tradition recorded by Clement of Alexandria (Strom., II, 20, P.G., VIII, col. 1060) and Eusebius (H. E., II, i, P. G., XX, col. 117) says that he was one of the seventy Disciples; but Acts (4:36-37) favours the opinion that he was converted to Christianity shortly after Pentecost (about A.D. 29 or 30) and immediately sold his property and devoted the proceeds to the Church. The Apostles, probably because of his success as a preacher, for he is later placed first among the prophets and doctors of Antioch (xiii, 1), surnamed him Barnabas, a name then interpreted as meaning "son of exhortation" or "consolation". (The real etymology, however, is disputed. See Encyl. Bibli., I, col. 484.) Though nothing is recorded of Barnabas for some years, he evidently acquired during this period a high position in the Church.

Posted by Jesus Caritas Est at 7:56 AM