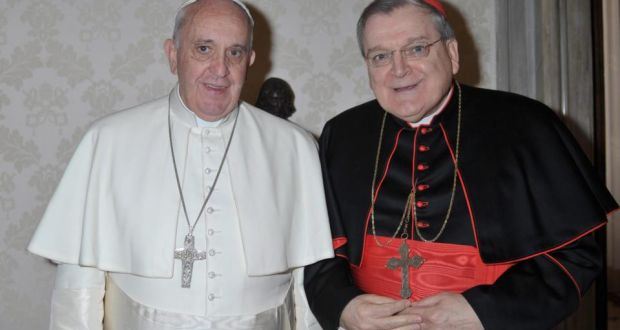 Pope Francis has reappointed Cardinal Burke to Apostolic Signatura. 'His appointment comes three years after he was removed as prefect Pope Francis, almost three years after removing him as the head prefect.This is the Vatican’s highest court. American Cardinal Burke was appointed along with Cardinal Agostino Vallini, Cardinal Edoardo Menichelli, Archbishop Frans Daneels and Bishop Johannes Willibrordus Maria Hendriks. Previously, Burke was prefect of the court for six years. He was removed in 2014 and appointed cardinal patron of the Order of Malta. He was one of the four cardinals who signed the ‘dubia’ requesting clarification on Amoris Laetitia. (along with Cardinal Joachim Meisner (deceased), Cardinal Carlo Caffarra (deceased), Cardinal Walter Brandmüller.