#PopeFrancis "the Blessed Virgin holds each one of us in her arms as her beloved children." FULL TEXT at Angelus + Video 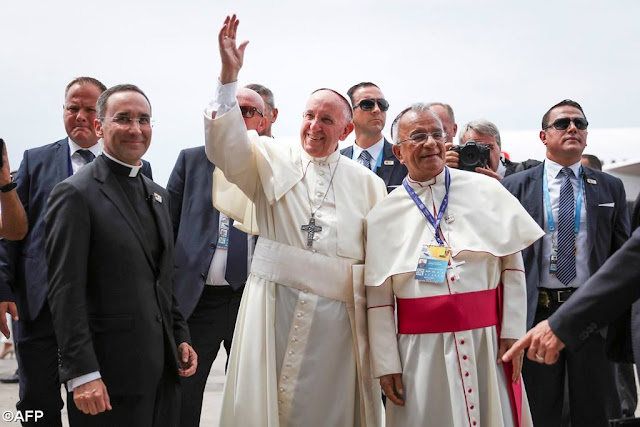 Pope Francis prayed the Angelus on Sunday in Cartagena during his Apostolic Visit to Colombia.
The Pope recited the prayer outside the Church and Monastery of St. Peter Claver in Cartagena de Indias.
Please find below the official English translation of the Pope’s prepared remarks:
Cartagena de Indias
Sunday, 10 September 2017
Dear Brothers and Sisters,
Shortly before I entered this church where the relics of Saint Peter Claver are kept, I blessed the first stones of two institutions that will minister to the those most in need, and I visited the house of Mrs Lorenza, who daily welcomes many of our brothers and sisters, offering them food and affection.   These visits have done me much good because they demonstrate how the love of God is made visible each day.
As we pray the Angelus, recalling the incarnation of the Word, we also reflect on Mary who conceived Jesus and brought him into the world.   We look to her this morning under the title of Our Lady of Chiquinquirá.  As you well know, over a long period of time this image was abandoned, discoloured, torn and full of holes.  It was treated like an old piece of cloth, shown no respect, and finally discarded.
It was then that, according to tradition, a humble woman, Maria Ramos, and the first devotee of the Blessed Virgin of Chiquinquirá, saw something different in that piece of cloth.  She had the courage and faith to put this blurred and torn fabric in a special place, restoring its lost dignity.  She encountered and honoured Mary who held her Son in her arms, doing precisely what was despicable and useless in the eyes of others.
And so, this woman became a model for all those who, in different ways, seek to restore the dignity of our brothers and sisters lost through the pain of life’s wounds, to restore the dignity of those who are excluded.  She is a model for all those who make efforts to provide dignified accommodation and care to those most in need.  She is, above all, a model for all those who pray perseveringly so that the men and women who are suffering may regain the splendour of the children of God which they have been robbed of.
The Lord teaches us through the example of the humble and those who are not valued.  While he gave María Ramos, an ordinary woman, the grace to receive the image of the Blessed Virgin in its poor and torn state, he also granted to the indigenous Isabel and her son Miguel the grace of being the first to see the transformed and renewed fabric of the Blessed Virgin.  They were the first to look humbly upon this completely renewed piece of fabric and recognize there the radiance of divine light which transforms and renews all things. They are the poor, humble ones, who contemplate the presence of God, and to whom the mystery of God’s love is revealed most clearly.  They, the poor and simple of heart, were the first to see the Blessed Virgin of Chinquinquirá and they became missionaries and heralds of her beauty and holiness.
In this church we will pray to Mary, who referred to herself as “the handmaid of the Lord”, and to Saint Peter Claver, the “slave of the blacks forever”, as he wanted others to know him from the day of his solemn profession.  He waited for the ships from Africa to arrive at the New World’s main centre of commerce in slavery.  Given the impossibility of verbal communication due to the language difference, he often ministered to these slaves simply through evangelizing gestures.  He knew that the language of charity and mercy was understood by all.  Indeed, charity helps us to know the truth and truth calls for acts of kindness.  Whenever he felt revulsion towards the slaves, he kissed their wounds.
Saint Peter Claver was austere and charitable to the point of heroism.  After consoling hundreds of thousands of people in their loneliness, he spent the last four years of his life in sickness and confined to his cell which was in a terrible state of neglect.
Saint Peter Claver witnessed in a formidable way to the responsibility and care that we should have for one another. Furthermore, this saint was unjustly accused of being indiscreet in his zealousness and he faced strong criticism and persistent opposition from those who feared that his ministry would undermine the lucrative slave trade.
Here in Colombia and in the world millions of people are still being sold as slaves; they either beg for some expressions of humanity, moments of tenderness, or they flee by sea or land because they have lost everything, primarily their dignity and their rights.
María de Chiquinquirá and Peter Claver invite us to work to promote the dignity of all our brothers and sisters, particularly the poor and the excluded of society, those who are abandoned, immigrants, and those who suffer violence and human trafficking.  They all have human dignity because they are living images of God.  We all are created in the image and likeness of God, and the Blessed Virgin holds each one of us in her arms as her beloved children.
Let us now turn to Our Blessed Virgin Mother in prayer, so that she may help us recognize the face of God in every man and woman of our time.