#PopeFrancis meets with Fr. Tom “Really, every day, I felt Jesus close to me." - Priest released by ISIS 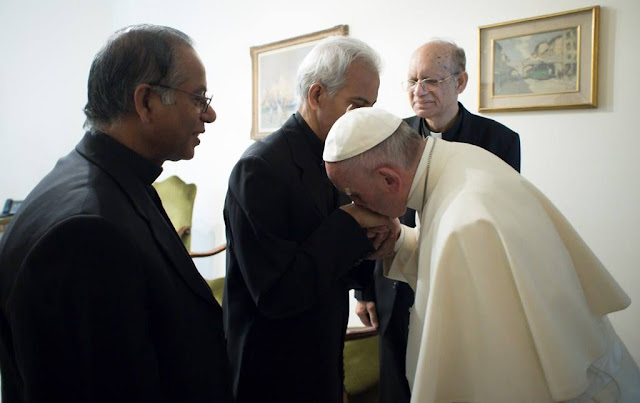 (Vatican Radio) Pope Francis on Wednesday met privately in the Vatican with the Indian Catholic priest who was freed from abduction by gunmen in Yemen.

The Vatican’s newspaper, L’Osservatore Romano, reported on the Pope's meeting with Salesian Father Tom Uzhunnalil at the papal residence of Santa Marta, after his weekly general audience in St. Peter’s Square. After being rescued on Tuesday, the 57-year old missionary was flown to the Omani capital, Muscat, and then to Rome, where he is recuperating in a Salesian community. He will return to India after a short stay in Rome.
'Pope visibly moved'
Upon meeting the Pope, Fr. Uzhunnalil went down on his knees kissing the feet of the Holy Father in profound reverence.  The Pope lifted Father Tom to his feet and kissed his hands.  Pope Francis embraced and encouraged the Indian missionary assuring him of his continued prayers, just as he had done during Fr. Tom's captivity.  L’Osservatore Romano said the Pope, “visibly moved, blessed him.”  Among several photos circulating the social media, one showed Pope Francis kissing the hand of Fr. Uzhunnalil.
Born in Ramapuram, in southern India’s Kerala state, Father Uzhunnalil belongs to the Bangalore Salesian province. He ‎was abducted on March ‎‎4, 2016 when four unidentified gunmen attacked a care home in Yemen's ‎southern port city of Aden, ‎killing 16 people, including four Missionaries of Charity sisters of Mother ‎Teresa. The 57-year old priest had been working for more than four years as a chaplain at the care home. ‎
Interior prayer
Fr. Uzhunnallil thanked the Pontiff saying he “prayed for him every day, offering his suffering for his mission and for the good of the Church.”  The Pope was touched by his words, the L’Osservatore Romano reported. The Salesian priest also said he was “unable to celebrate the Eucharist,” but would recite “in my heart all the prayers of the Mass.”
The Indian priest assured the Pope he would continue praying for all who had been close to him spiritually. He particularly recalled the four Missionaries of Charity sisters of Mother Teresa and twelve people killed during the attack last year.
Fr. Uzhunnallil was particularly grateful to the government of Oman for obtaining his release. The Holy See, in a communique, has already expressed its gratitude to all those in obtaining his release, especially the Sultan of Oman, Qaboos, and competent authorities of the sultanate.
'Jesus is great and loves us'
Indian Cardinal Oswald Gracias, Archbishop of Bombay, who is in the Vatican for the 'C9' Council of Cardinals meeting, accompanied the Salesian priest to the Pope. “After this terrible experience, the essential message that Fr. Tom gives is that Jesus is great and loves us,”  Cardinal Gracias told L’Osservatore Romano.  Fr. Uzhunnalil agreed with him saying, “Really, every day, I felt Jesus close to me.  I always knew and felt in my heart that I was not alone.”
L’Osservatore Romano said that Fr. Uzhunnalil will be in Rome in a Salesian community for some time to undergo some medical check-ups. Cardinal Gracias said that the priest was in “good” health, adding that during his 18-month captivity he did not have any particular problem and was treated well.
Fr. Uzhunnalil was born and brought up in a devout Catholic family. His uncle Matthew, who died in 2015, was also a Salesian priest, and founded the mission in Yemen, where he served.