#PopeFrancis “Jesus asks us to be witnesses of that same hope, confident in the transforming power of his Spirit at work in our hearts and in our world." Audience + FULL Video 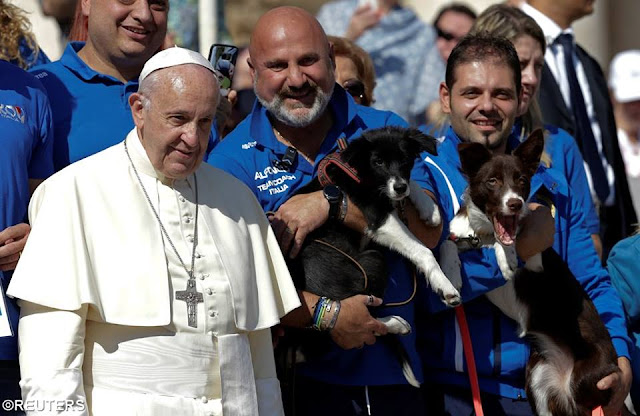 (Vatican Radio) In a sunny St Peter’s Square on Wednesday, Pope Francis during his General Audience didn’t disappoint those pilgrims who had come to hear his continuing catechesis on Christian hope. This week the Holy Father turned his attention to the Christian’s calling to be a missionary of hope.

Example of St Francis
As an example, he chose a great Saint of the Church and his own namesake St Francis, whose feast day is celebrated on October 4th, calling him “a true missionary of the joyful hope born of Christ’s victory over death…”
He went on to says that, “Jesus asks us to be witnesses of that same hope, confident in the transforming power of his Spirit at work in our hearts and in our world.  Joy, the Pope underlined, “ is the sure sign of true Christian hope, but he also noted that, there are times when the gift of hope proves costly.
Persecuted Christians
The Holy Father was referring to “fellow Christians who presently experience persecution” and all the martyrs down through the centuries. He said that, “their witness inspires us to continue to hope in Christ’s promises.  As missionaries of hope, may we rejoice in God’s saving power, never lose heart, and help others to look to the future with confidence.”
The Pope noted that the task of Christians in this world is to open a space for salvation, adding that, “when the sky is cloudy, it is a blessing for those who know the sun.”
Behold, the true Christian is this, said Pope Francis,  “not complacent and angry, but convinced, by the strength of the resurrection…”
Middle East
Concluding his Audience the Holy Father greeted all the English speaking pilgrims present and in words to visitors from Egypt, the Pope prayed that the Lord would bless them and protect their country, the Middle East and the whole world from all evil and terrorism.
Towards the end of the General Audience on Wednesday, Pope Francis announced that from 19 to 24 March 2018, the General Secretariat of the Synod of Bishops will convene a pre-synodal meeting inviting young people from different parts of the world, both young Catholics and young people from different Christian denominations and other religions, as well as non-believers.

"This initiative, the Pope said, is part of the preparations for the next General Assembly of the Synod of Bishops, which will be on Youth, Faith and Vocation Discernment in October 2018.”
With this journey, the Pope continued, “the Church wants to listen to the voice, the sensitivity, of faith and also the doubts and criticisms of young people. Following this, conclusions of the March Meeting will be transmitted to the Synod Fathers.”
ENGLISH Language Summary of Catechesis

Speaker: Dear Brothers and Sisters: In our continuing catechesis on Christian hope, I would now like to speak of our calling to be missionaries of hope. October is traditionally dedicated to reflection on our participation in the Church’s mission. Saint Francis of Assisi, whose feast we celebrate today, can serve as our model in this regard. Francis was a true missionary of the joyful hope born of Christ’s victory over death and our own share in his risen life. Jesus asks us to be witnesses of that same hope, confident in the transforming power of his Spirit at work in our hearts and in our world. Joy is the sure sign of true Christian hope, for we know that evil will not have the upper hand, and that God’s love, revealed on the cross, will ultimately triumph. Certainly, there are times when the gift of hope proves costly. This is the case with so many of our fellow Christians who presently experience persecution, and with the martyrs in every age. Their witness inspires us to continue to hope in Christ’s promises. As missionaries of hope, may we rejoice in God’s saving power, never lose heart, and help others to look to the future with confidence.
Speaker: I greet the English-speaking pilgrims and visitors taking part in today’s Audience, particularly the groups from England, Scotland, Denmark, Nigeria, Australia, Indonesia, New Zealand, China and the United States of America. I especially greet the new students of the Pontifical Beda College in Rome, with the assurance of my closeness in prayer as they begin their studies for the priesthood. Upon all of you, and your families, I invoke joy and peace in our Lord Jesus Christ.
[Original text: English]