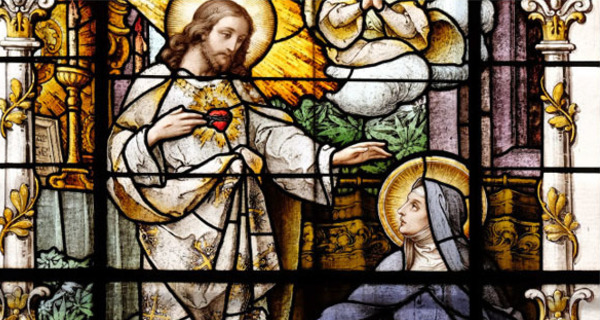 Religious of the Visitation Order. Apostle of the Devotion to the Sacred Heart of Jesus,
Born at Lhautecour, France, 22 July, 1647;
Died at Paray-le-Monial, 17 October, 1690.

Consecration to the Sacred Heart of Jesus - 1st Friday Promises and Instructions - Prayers - Share! (http://jceworld.blogspot.ca/2014/10/consecration-to-sacred-heart-of-jesus.html)
Patron of:
those suffering with polio, devotees of the Sacred Heart, loss of parents
Her parents, Claude Alacoque and Philiberte Lamyn, were distinguished less for temporal possessions than for their virtue, which gave them an honourable position. From early childhood Margaret showed intense love for the Blessed Sacrament, and preferred silence and prayer to childish amusements. After her first communion at the age of nine, she practised in secret severe corporal mortifications, until paralysis confined her to bed for four years. At the end of this period, having made a vow to the Blessed Virgin to consecrate herself to religious life, she was instantly restored to perfect health. The death of her father and the injustice of a relative plunged the family in poverty and humiliation, after which more than ever Margaret found consolation in the Blessed Sacrament, and Christ made her sensible of His presence and protection. He usually appeared to her as the Crucified or the Ecce Homo, and this did not surprise her, as she thought others had the same Divine assistance. When Margaret was seventeen, the family property was recovered, and her mother besought her to establish herself in the world. Her filial tenderness made her believe that the vow of childhood was not binding, and that she could serve God at home by penance and charity to the poor. Then, still bleeding from her self-imposed austerities, she began to take part in the pleasures of the world. One night upon her return from a ball, she had a vision of Christ as He was during the scourging, reproaching her for infidelity after He had given her so many proofs of His love. During her entire life Margaret mourned over two faults committed at this time--the wearing of some superfluous ornaments and a mask at the carnival to please her brothers.
On 25 May, 1671, she entered the Visitation Convent at Paray, where she was subjected to many trials to prove her vocation, and in November, 1672, pronounced her final vows. She had a delicate constitution, but was gifted with intelligence and good judgement, and in the cloister she chose for herself what was most repugnant to her nature, making her life one of inconceivable sufferings, which were often relieved or instantly cured by our Lord, Who acted as her Director, appeared to her frequently and conversed with her, confiding to her the mission to establish the devotion to His Sacred Heart. These extraordinary occurrences drew upon her the adverse criticism of the community, who treated her as a visionary, and her superior commanded her to live the common life. But her obedience, her humility, and invariable charity towards those who persecuted her, finally prevailed, and her mission, accomplished in the crucible of suffering, was recognized even by those who had shown her the most bitter opposition.
Margaret Mary was inspired by Christ to establish the Holy Hour and to pray lying prostrate with her face to the ground from eleven till midnight on the eve of the first Friday of each month, to share in the mortal sadness He endured when abandoned by His Apostles in His Agony, and to receive holy Communion on the first Friday of every month. In the first great revelation, He made known to her His ardent desire to be loved by men and His design of manifesting His Heart with all Its treasures of love and mercy, of sanctification and salvation. He appointed the Friday after the octave of the feast of Corpus Christi as the feast of the Sacred Heart; He called her "the Beloved Disciple of the Sacred Heart", and the heiress of all Its treasures. The love of the Sacred Heart was the fire which consumed her, and devotion to the Sacred Heart is the refrain of all her writings. In her last illness she refused all alleviation, repeating frequently: "What have I in heaven and what do I desire on earth, but Thee alone, O my God", and died pronouncing the Holy Name of Jesus.
The discussion of the mission and virtues of Margaret Mary continued for years. All her actions, her revelations, her spiritual maxims, her teachings regarding the devotion to the Sacred Heart, of which she was the chief exponent as well as the apostle, were subjected to the most severe and minute examination, and finally the Sacred Congregation of rites passed a favourable vote on the heroic virtues of this servant of God. In March, 1824, Leo XII pronounced her Venerable, and on 18 September, 1864, Pius IX declared her Blessed. When her tomb was canonically opened in July, 1830, two instantaneous cures took place. Her body rests under the altar in the chapel at Paray, and many striking favours have been obtained by pilgrims attracted thither from all parts of the world. Her feast is celebrated on 17 October. [Editor's Note: St. Margaret Mary was canonized by Benedict XV in 1920. Her feast is now 16 October.] Text from The Catholic Encyclopedia