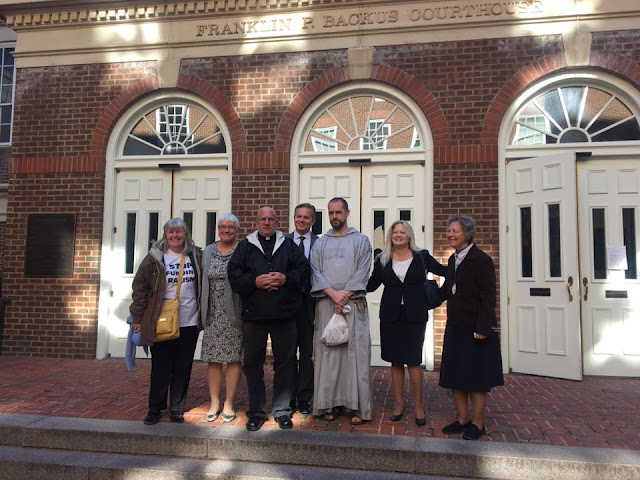 Two Catholic priests avoided the jail sentences they were expecting on Monday for a September pro-life protest in Alexandria, Virginia. The judge gave them and four co-defendants suspended fines. "Babies are dying, and that is why we did what we did, to intervene on behalf of the babies," Imbarrato said, outside the courthouse. "I was very happy that the judge was somewhat open to the necessity defense."
Six members of the pro-life community, including two priests, who were participating in the Red Rose Rescue campaign of September 15, they refused to leave abortion clinics where they attempted to speak with women scheduled for abortions. Citizens for a Pro-Life Society, headed by Monica Miller, Ph.D. was also arrested on the same day for refusing to leave an abortion clinic in Michigan. The Red Rose Rescue consists of pro-lifers offering red roses to women in the waiting room of abortion clinics. Attached to the rose is a card with words of encouragement and phone numbers for local pregnancy help centers. “The goal of the Red Rose Rescue is to persuade women in the waiting room to reconsider their decision to abort and leave the clinic with at least one of the rescuers,”

The six people arrested were Fr. Stephen Imbarrato who is associated with Priests for Life, Fr. Fidelis Moscinski with the Franciscan Friars of the Renewal, pro-life heroine Joan Andrews Bell and three other women, Julie Haag, Bonnie Borel Donahue and Joan McKee. At the same time, in the state of Michigan, four more pro-lifers were arrested for trespass. Those arrested at the Michigan clinic were Dr. Miller, who is also a Women of Grace board member, along with Will Goodman, Matthew Connolly and twenty-year-old Abby McIntyre who attends Indiana State University and interned with Bryan Kemper of Stand True.  Their trial is scheduled for Saint Valentine’s Day, Feb.14, 2018. They are represented by Robert Muise of the American Freedom Law Center. As Dr. Miller explains, “The Red Rose Rescue is an act of charity for women who feel, for whatever reason, that they must abort their innocent unborn children. Those who perform the rescues are willing to embrace risks for these women and their babies. They will go into the very places where the unborn are put to death and extend help to the moms. Should this help be refused—they will not leave the abortion centers but remain in solidarity with the helpless victims oppressed by the injustice of abortion.” She added: “Saint Mother Teresa of Calcutta said that her work was ‘to go into the dark holes of the poor.’ The Red Rose Rescue is an action of going into the dark holes of the poor—namely abortion centers where the innocent are rejected—and in these dark holes we seek to bring hope, true peace and the presence of God.”
Posted by Jesus Caritas Est at 9:40 AM