Wow #PopeFrancis hosts 1500 for Lunch for World Day for the Poor and sets up Field Hospital on #Vatican Grounds! 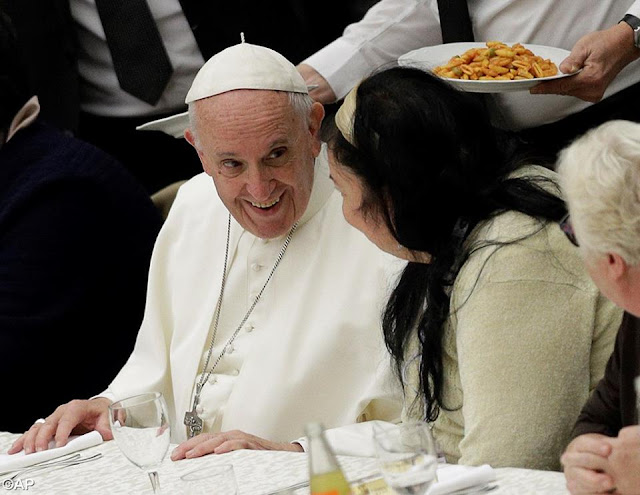 Vatican Radio Text Report: This Sunday, November 19th marks the first World Day of the Poor, which Pope Francis called for at the conclusion of the Jubilee Year of Mercy.
The Pontifical Council for New Evangelisation on Tuesday announced a number of special events that are taking place throughout the week to highlight this annual initiative.
On Sunday morning in St Peter’s Basilica, some four thousand poor and needy people, accompanied by volunteers from Italy, France, Spain, Brussels, Luxembourg and Poland will take part in a Mass celebrated by Pope Francis. Following the Eucharist, 1.500 of the visitors will be invited to lunch in the adjacent Paul VI Hall, while the other 2.500 guests will be taken to lunch in some of the Catholic colleges, seminaries and charitable organisations in the vicinity of the Vatican. Festive lunch in Paul VI Hall Those dining in the Paul VI Hall will be served a meal of gnocchi with tomato sauce and veal stew with vegetables, plus tiramisu and coffee for desert, all prepared by papal chef Sergio Dussin from Bassano del Grappa in Italy’s northern Veneto region. The Vatican police band and a children’s choir will provide background music for the festive lunch, which has been organised in collaboration with a number of local charity organisations and parishes. Prayer vigil at St Lawrence Basilica On the previous evening, Saturday 18th at 8pm, there will also be a prayer vigil in the ancient Rome Basilica of St Lawrence to remember volunteers all over the world who offer their services in support of the poor and marginalized. Throughout the week of the 13th to 19th November, meanwhile, a mobile clinic has been set up just in front of St Peter’s Square offering free specialized medical services between the hours of 9am and 4pm. Free medical services A special booklet marking this first World Day of the Poor has also been published in six languages as a pastoral aid for dioceses and parishes worldwide who wish to take part in this important initiative. Radio Vaticana Text-Image
Posted by Jesus Caritas Est at 6:25 PM