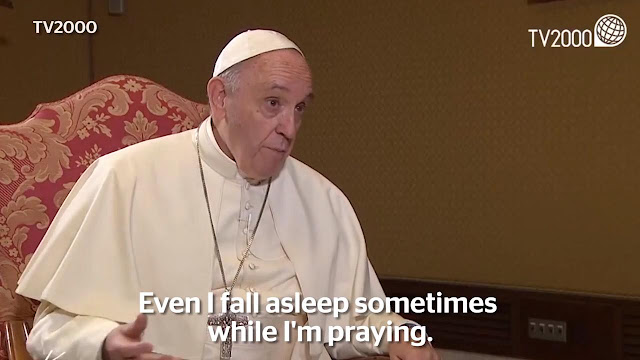 Pope Francis recently spoke on a television series on the “Our Father” aired by Italian television network TV2000.
This was filmed in collaboration with the Vatican's Secretariat for Communications, the series consists of nine question-and-answer sessions with Pope Francis and Fr. Marco Pozza, a theologian and a prison chaplain in Padua.
Causing some exaggerated headlines in media is the 7th part of the series. Here Pope Francis says that the "Our Father" prayer “This is not a good translation.”  The Pontiff explained, “I am the one who falls, it's not (God) who pushes me toward temptation to see how I fall. A father doesn't do this, a father helps us to get up right away.”
In the original Greek text of the Gospel of Matthew uses in that passage a verb composed: eis più fero (μὴ εἰσενέγκῃς ἡμᾶς εἰς πειρασμόν ) that is literally: to bring in. This is why the question arises whether it is God who leads man into temptation or whether it is human weakness that yields to the lure of the evil one. The episcopal conferences of France and Spain have already changed the prayer for greater clarity. By modifying both the text with the meaning it sounds like this: do not let oneself fall into temptation.
The FULL Video 7th Interview is found below and the 1st Video contains the specific mention of the Translation: