Pope Francis at Mass honoring Our Lady of Guadalupe "God’s mercy extends to all the people..." FULL TEXT + Video 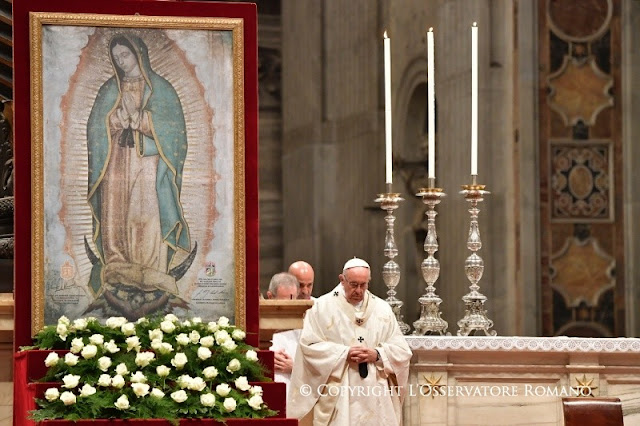 Pope Francis celebrating Mass on the feast of Our Lady of Guadalupe, in St. Peter's Basilica, Dec. 12, 2017.
The Holy Father’s Homily - FULL TEXT
The Gospel that has just been proclaimed is the preface of two great canticles: Mary’s canticle known as the “Magnificat” and Zachariah’s canticle, the “Benedictus,” and I like to call it “the canticle of Elizabeth or of fecundity.” Thousands of Christians throughout the world begin the day singing: “Blessed be the Lord,” and they end the day “proclaiming His greatness because He has looked with kindness on the littleness of His own.” Thus, day after day, believers of different nations seek to remember, to remember that from generation to generation God’s mercy extends to all the people, as He promised our fathers. And in this context of grateful memory, Elizabeth’s song blossoms in the form of a question: “Who am I that the Mother of my Lord should come to visit me?” We find Elizabeth, the woman marked by the sign of sterility, singing under the sign of fecundity and astonishment.
I would like to underscore these two aspects: Elizabeth, the woman under the sign of sterility and under the sign of fecundity.
We can perceive it thus in the little Indian Juan Diego, when he said to Mary” I, in fact, am not worth anything, I’m Mecapal, I’m Cacaxtle, I’m tail, I’m wing feeling, subservient and to a foreign charge, it’s not my whereabouts nor do I go there where you deign to send me.”So this sentiment can also be – as the Latin American Bishops made us see – in our “Indian and Afro-American communities which, on many occasions, aren’t treated with dignity and equality of conditions; or in many women, who are excluded because of their sex, race or socio-economic situation; young people who receive a low-quality education and have no opportunities to make progress in their studies or to enter the labor market to develop themselves and form a family; many poor <people>, unemployed, migrants, displaced, landless peasants, who try to survive in the informal economy; boys and girls subjected to child prostitution often linked to sexual tourism.”
It seems that again and again God is determined to show us the stone that the builders rejected, which becomes the corner stone (Cf. Psalm 117:22).
Dear brothers, in the midst of this dialectic of fecundity-sterility let us look at the richness and cultural diversity of our peoples of Latin America and the Caribbean, it is the sign of the great richness that we are invited not only to cultivate but, especially in our time, to defend courageously from all attempts to homogenize, which ends by imposing – under attractive slogans – only one way of thinking, of being, of feeling, of living, which ends by making invalid or sterile all that we have inherited from our elders; which ends by making us feel, especially our young people, a little thing for belonging to this or that culture. In short, our fecundity calls us to defend our peoples from an ideological colonization that cancels the richest <part> of them, whether they are Indians, Afro-Americans, mestizos, peasants or suburbanites.
The Mother of God is figure of the Church (Lumen Gentium, 63) and from her we want to learn to be Church with a mestizo face, with an Indian, Afro-American, peasant face, or a boy or girl, old or young man, so that no one feels sterile or unfruitful, so that no one feels ashamed or a little thing. But, on the contrary, so that each one, like Elizabeth and Juan Diego, feels him/herself bearer of a promise, of a hope, and is able to say from his/her innermost being: “Abba!, namely, Father!: (Galatians 4:6) from the mystery of that filiation that, without cancelling each one’s features, universalizes us constituting us a people. Brothers, in this atmosphere of grateful memory for our being Latin Americans, let us sing in our heart Elizabeth’s canticle, the song of fecundity, and let us say it together to our peoples not to tire to repeat: Blessed art Thou among women and blessed is the fruit of thy womb, Jesus.
[Original text: Spanish] [Vatican-provided working translation of prepared text]