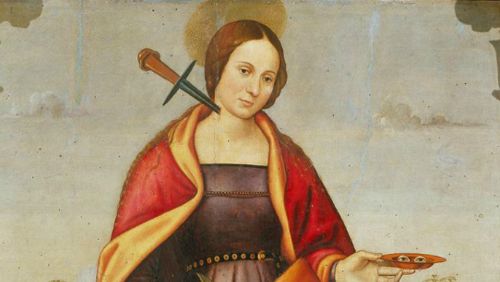 A virgin and martyr of Syracuse in Sicily, whose feast is celebrated by Latins and Greeks alike on 13 December. According to the traditional story, she was born of rich and noble parents about the year 283. Her father was of Roman origin, but his early death left her dependent upon her mother, whose name, Eutychia, seems to indicate that she came of Greek stock.
Like so many of the early martyrs, Lucy had consecrated her virginity to God, and she hoped to devote all her worldly goods to the service of the poor. Her mother was not so single-minded, but an occasion offered itself when Lucy could carry out her generous resolutions. The fame of the virgin-martyr Agatha, who had been executed fifty-two years before in the Decian persecution, was attracting numerous visitors to her relics at Catania, not fifty miles from Syracuse, and many miracles had been wrought through her intercession. Eutychia was therefore persuaded to make a pilgrimage to Catania, in the hope of being cured of a hæmorrhage, from which she had been suffering for several years. There she was in fact cured, and Lucy, availing herself of the opportunity, persuaded her mother to allow her to distribute a great part of her riches among the poor.
The largess stirred the greed of the unworthy youth to whom Lucy had been unwillingly betrothed, and he denounced her to Paschasius, the Governor of Sicily. It was in the year 303, during the fierce persecution of Diocletian. She was first of all condemned to suffer the shame of prostitution; but in the strength of God she stood immovable, so that they could not drag her away to the place of shame. Bundles of wood were then heaped about her and set on fire, and again God saved her. Finally, she met her death by the sword. But before she died she foretold the punishment of Paschasius and the speedy termination of the persecution, adding that Diocletian would reign no more, and Maximian would meet his end. So, strengthened with the Bread of Life, she won her crown of virginity and martyrdom.
This beautiful story cannot unfortunately be accepted without criticism. The details may be only a repetition of similar accounts of a virgin martyr's life and death. Moreover, the prophecy was not realized, if it required that Maximian should die immediately after the termination of his reign. Paschasius, also, is a strange name for a pagan to bear. However, since there is no other evidence by which the story may be tested, it can only be suggested that the facts peculiar to the saint's story deserve special notice. Among these, the place and time of her death can hardly be questioned; for the rest, the most notable are her connexion with St. Agatha and the miraculous cure of Eutychia, and it is to be hoped that these have not been introduced by the pious compiler of the saint's story or a popular instinct to link together two national saints. The story, such as we have given it, is to be traced back to the Acta, and these probably belong to the fifth century. Though they cannot be regarded as accurate, there can be no doubt of the great veneration that was shown to St. Lucy by the early church. She is one of those few female saints whose names occur in the canon of St. Gregory, and there are special prayers and antiphons for her in his "Sacramentary" and "Antiphonary". She is also commemorated in the ancient Roman Martyrology. St. Aldhelm (d. 709) is the first writer who uses her Acts to give a full account of her life and death. This he does in prose in the "Tractatus de Laudibus Virginitatis" (Tract. xliii, P.L., LXXXIX, 142) and again, in verse, in the poem "De Laudibus Virginum" (P.L., LXXXIX, 266). Following him, the Venerable Bede inserts the story in his Martyrology.
With regard to her relics, Sigebert (1030-1112), a monk of Gembloux, in his "sermo de Sancta Lucia", says that he body lay undisturbed in Sicily for 400 years, before Faroald, Duke of Spoleto, captured the island and transferred the saint's body to Corfinium in Italy. Thence it was removed by the Emperor Otho I, 972, to Metz and deposited in the church of St. Vincent. And it was from this shrine that an arm of the saint was taken to the monastery of Luitburg in the Diocese of Spires--an incident celebrated by Sigebert himself in verse.
The subsequent history of the relics is not clear. On their capture of Constantinople in 1204, the French found some of the relics in that city, and the Doge of Venice secured them for the monastery of St. George at Venice. In the year 1513 the Venetians presented to Louis XII of France the head of the saint, which he deposited in the cathedral church of Bourges. Another account, however, states that the head was brought to Bourges from Rome whither it had been transferred during the time when the relics rested in Corfinium.