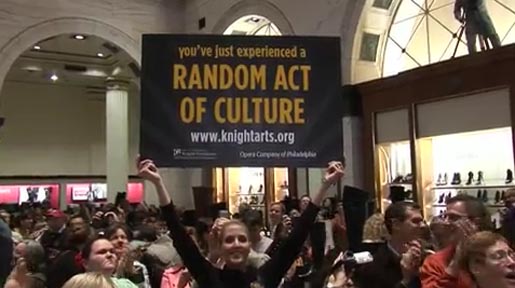 Shoppers at Macy’s surprise rendition of Handel’s Hallelujah chorus in Philadelphia.  When the 650 choristers, accompanied by the Wanamaker organ -- the largest organ in the world .
Video has been viewed millions of times.  “We are all drawn a little bit closer to heaven when we hear this played and sung,” said one listener.
“The Church at one time used to be in the center of the marketplace. The Church was central to the culture with various forms of art. So as you look at what took place at Macy’s, it is not a far cry from how the Church used to be accepted.”
A shopper noted: “There is a certain lack of beauty in much of today’s music, as well as a lack of dignity. By the way, have you noticed how little of today’s music is beautiful? It’s cool, funky, raw, radical, jazzy, upbeat -- but not beautiful.”

A tradition originated when the Messiah premiered in London in the presence of King George II.  When the first chords of the chorus began, the king rose and remained standing.

Royal protocol has it that whenever a monarch stands, those in his or her presence should also stand as a sign of respect.  Therefore, on this occasion, both the audience and the orchestra stood with the king; this continues today.
SHARE this Beautiful piece of Music to Inspire all!