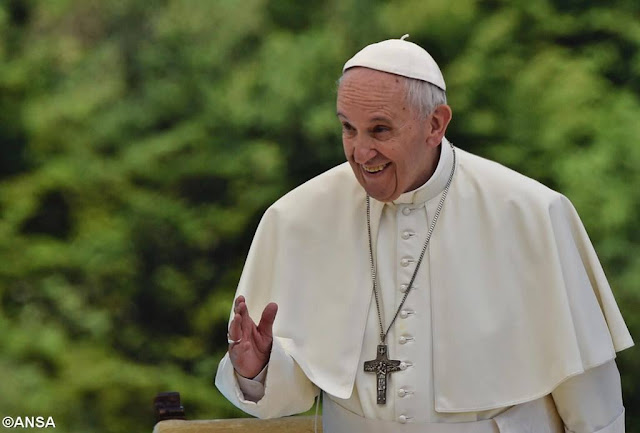 Gentlemen,
Venerable Brothers in the Episcopate and in the Priesthood,
Dear brothers and sisters,

I am pleased to welcome you and I thank the President for the words he has addressed to me. The celebration of an anniversary is always a moment of joy, of thanksgiving for what happened in the past and, at the same time, a commitment to the future. This also applies to the Pontifical Academia Theologica, which celebrates this year the three centuries of institution, which took place on April 23, 1718 with a brief letter by Pope Clement XI.

Three centuries of life certainly constitute a significant milestone, but they must not be an opportunity either to look at themselves narcissistically, or to look nostalgically at the past. Rather, they represent the stimulus for a renewed awareness of one's own identity and for a re-launch of one's mission in the Church.

The Pontifical Academy of Theology has known, in its history, various changes of structure and organization to meet the ever new challenges posed by the different social and ecclesial contexts in which it has found itself operating. In fact, in the intentions of Cardinal Cosimo de 'Girolami, it arises as a place for theological formation of the clergy at a time when other institutions were deficient and inadequate for this purpose. However, when the change in the historical and cultural situation no longer required this task, the Academy assumed the physiognomy - which it still possesses - of a group of scholars called to investigate and deepen theological themes of particular relevance. At the same time, in the composition of the body of the members, it was outlined the balance between the members operating in Rome and those operating outside it, which still today distinguishes the particular Catholic and international dimension of the Institution.

Beyond the various changes, however, there is a constant element that characterizes the Academy: to be at the service of the Church with the aim of promoting, soliciting and supporting in its various forms the intelligence of faith in the God revealed in Christ; Faithful to the teaching of the Church and open to the demands and challenges of culture, it is a place of confrontation and dialogue for the communication of the Gospel in ever new contexts, letting itself be urged by the urgencies that come from suffering humanity to offer the contribution of a Believing, incarnated and supportive thinking: the Creation Forum that you are currently holding is also pushing you in this direction.

Then there is another aspect that since its origin has characterized your Academy: it is a link with the other Roman university and educational institutions, starting from the ancient "La Sapienza" University, to continue with the Schools of the Roman Seminary. , until what will later become the Pontifical University of Rome.

The continuous contacts, in a relationship of mutual cultural exchange, with these institutions and with many religious congregations to which belonged and its members belong, have made sure that the Pontifical Academy of Theology has never considered an isolated entity and autonomous, but has played its role inserted in a web of relationships from which all the interlocutors have been enriched. Looking at this past, the Academy is still called today to grasp its identity not in a self-referential perspective, but as a promoter of an encounter between theology, philosophy and human sciences, so that the good seed of the Gospel will bear fruit in the vast field of knowledge . Finally, the necessity of an ever closer collaboration between Roman ecclesiastical university institutions requires the Theological Academy not to be estranged, but to be able to place itself in fruitful dialogue with each of them in order to foster a common, coordinated and shared work.

With these prospects for the future, and assuring you of my prayer and my closeness, I impart to you my Apostolic Blessing. Please do not forget to pray for me.

Posted by Jesus Caritas Est at 8:04 AM