#PopeFrancis "discover in the wisdom of their grandparents and their elders, the DNA that guided their great saints.” Farewell Ceremony FULL Video 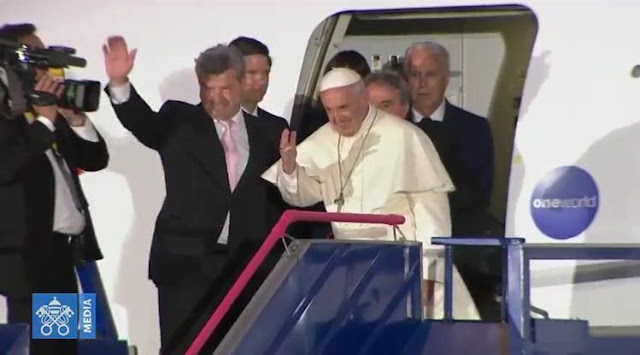 Vatican News Release: Pope Francis bids farewell to Peru
Pope Francis urges the people of Peru to “protect their hope”, as he leaves the country, the final stop on his journey in Latin America.

Pope Francis has departed Lima following a farewell ceremony at the city’s airport. The Pope’s plane took off at around 7.10pm local time. Before boarding the Pope met with the President of Peru and his wife.
Following Mass earlier at the Las Palmas airbase in Lima, the Holy Father, in farewell greetings, thanked everyone who had made his journey possible.

He said, "I began my pilgrimage among you by speaking of Peru as a land of hope.  A land of hope because of its biodiversity and the beauty of its landscapes, which help us to discover the presence of God. A land of hope because of its rich traditions and customs, which have shaped the soul of this people.  A land of hope for its young people, who are not the future but the present of Peru.”
Pope Francis then urged the people of the country  “to discover in the wisdom of their grandparents and their elders, the DNA that guided their great saints.”  “Do not lose your roots”, he said.
The Pope also urged them, “not to be afraid to be the saints of the XXI century.”
The Holy Father invited the people of this land to “Protect your hope.”  “There is no better way, he added to protect your hope than to remain united, so that these reasons for hope may grow day by day in your hearts.”
Pope Francis’ visit to Peru was the find leg of his journey to Latin America which began in Chile earlier this week. The Pope is due to touch down in Rome on Monday afternoon at around 14.15 local time.
Posted by Jesus Caritas Est at 10:52 AM