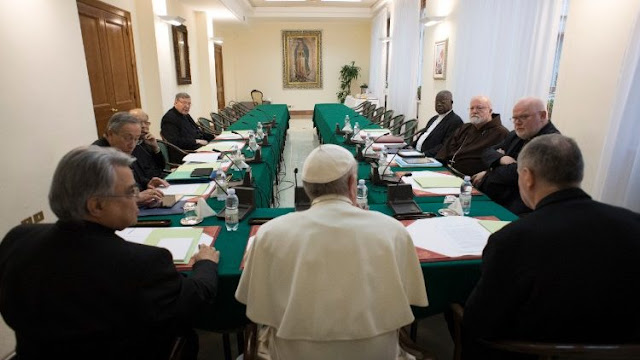 Vatican News Release: Pope meets cardinal advisors for first 2018 session The 23rd meeting of the C9 Council, charged with advising the Pope on reforming the Roman Curia, has begun in the Vatican. By Richard Marsden
Pope Francis has met with his C9 Council of Cardinals for the first time in 2018 to continue their study of reform of the Roman Curia, with a particular focus on the main dicasteries. The 23rd meeting of the body set up in September 2013 by Pope Francis began on Monday and is set to end on Wednesday. In a recent interview with Vatican News, the secretary of the C9, Bishop Marcello Semeraro, explained that this working session would continue the “final phase” of study on the fundamental dicasteries of the Curia. Bp Semeraro: For Pope spiritual exercises are the ongoing reform “Change in mentality” During the interview, the Bishop of Albano added that “the reform for organisations is real, changes in structures, but the first change that must be made - and permanently - is a change in mentality.” Bishop Semeraro said the reforms intend to express “a harmony with what the Pope has written in the Exhortation Evangelii Gaudium” followed by “putting oneself in that paradigm of missionary activity, of proclaiming the Gospel, in the light of which all other organisational and institutional realities are faced.” The C9 body was established with the task of helping Pope Francis “in the government of the universal church and to study a plan for revising the Apostolic Constitution on the Roman Curia, Pastor Bonus.”
Source: Text and Image Share from Vatican News
Posted by Jesus Caritas Est at 9:54 AM