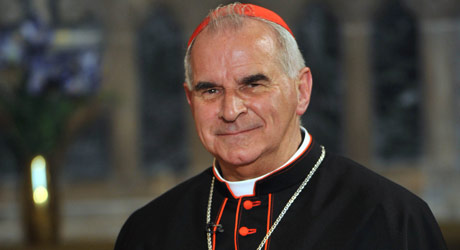 Cardinal Keith Michael Patrick O’Brien has died.
He passed away peacefully in the early hours of March 19 at the age of 80 at the Royal Victoria Hospital in Newcastle-upon-Tyne surrounded by family and friends.
He had been in the care of the Little Sisters of the Poor in Newcastle, but was hospitalised after a fall in February.
The cardinal was Archbishop of St Andrews & Edinburgh Archdiocese from 1985 until his controversial resignation in 2013.
Archbishop Leo Cushley, the current archbishop of St Andrews & Edinburgh, said: “In life, Cardinal O’Brien may have divided opinion – in death, however, I think all can be united in praying for the repose of his soul, for comfort for his grieving family and that support and solace be given to those whom he offended, hurt and let down. May he rest in peace.”
Born on March 17 1938 in Ballycastle, Co Antrim, Northern Ireland, Keith O’Brien was ordained a priest on April 3, 1965, at St Mary’s Cathedral in Edinburgh. He was consecrated as Archbishop by Cardinal Gordon Grey on August 5, 1985.
He was only the fourth cardinal for Scotland since the Reformation.
Archbishop Cushley visited the cardinal on Friday and administered the Sacrament of the Sick. In a message to priests and deacons, he said: “Today, I learned that the doctors at [the archbishop’s] hospital believe that his condition is not improving and that he may not have long to live. Please remember him in your prayers.”
Cardinal O’Brien’s resignation ahead of his 75 birthday was accepted on November 13, 2012. However, in February 2013, The Observer reported allegations from former and serving priests of sexual misconduct against the cardinal. On March 3, the cardinal admitted that ‘there have been times that my sexual conduct has fallen below the standards expected of me as a priest, archbishop and cardinal.’
He apologised and asked for forgiveness. Following an apostolic visitation, the Vatican announced in 2015 that Pope Francis had accepted the ‘resignation of Cardinal Keith Patrick O’Brien from the rights and duties of a cardinal.’
Funeral arrangements for Cardinal O’Brien are still to be finalised but will be done so in coming days in consultation with the Holy See and Cardinal O’Brien’s family, the archdiocese said.
Source: sconews.co.uk
Posted by Jesus Caritas Est at 6:16 PM