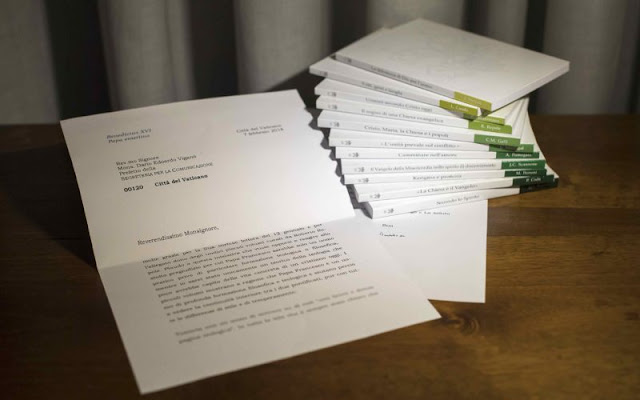 Mgr Dario Vigano, prefect of the Vatican Secretariat for Communication, explained that he had asked Pope Emeritus Benedict XVI to “write a page or a page and a half of dense theology in his clear and punctual style that (we) would have liked to read this evening.”
Pope Benedict  wrote he hope that the series would contradict “the foolish prejudice of those who see Pope Francis as someone who lacks a particular theological and philosophical formation …”
Pope Benedict said the books “reasonably demonstrate that Pope Francis is a man with profound philosophical and theological formation and are helpful to see the interior continuity between the two pontificates, even with all the differences in style and temperament.”
The Associated Press’ Vatican reporter, Nicole Winfield, wrote, “The Vatican admitted Wednesday that it altered a photo sent to the media of a letter of retired Pope Benedict XVI about Pope Francis. The manipulation changed the meaning of the image in a way that violated photojournalist industry standards.”
The Vatican explained that the letter itself was never intended to be made public.
At a news conference, Mgr Vigano read out loud the lines that were subsequently obscured.
Posted by Jesus Caritas Est at 9:16 AM