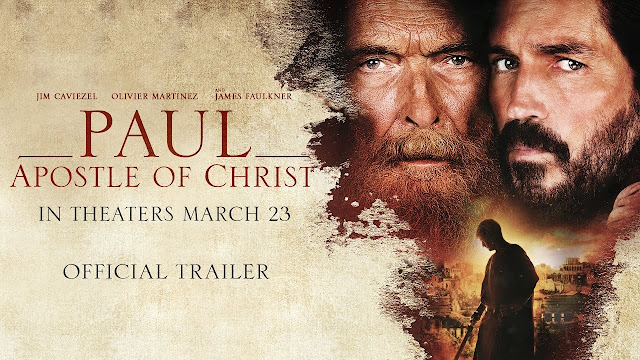 Wow the New Movie, "Paul, Apostle of Christ" is now in theatres and receiving great reviews. This Faith based movie has a long list of famous Hollywood actors including Jim Caviezal, of The Passion. This is a historical drama that is worth the view during this season of Lent.
Official Site of Paul Apostle Movie: ABOUT THE FILM
PAUL, APOSTLE OF CHRIST is the story of two men. Luke, as a friend and physician, risks his life when he ventures into the city of Rome to visit Paul, who is held captive in Nero’s darkest, bleakest prison cell. But Nero is determined to rid Rome of Christians, and does not flinch from executing them in the grisliest ways possible. Before Paul’s death sentence can be enacted, Luke resolves to write another book, one that details the beginnings of “The Way” and the birth of what will come to be known as the church.
Bound in chains, Paul’s struggle is internal. He has survived so much—floggings, shipwreck, starvation, stoning, hunger and thirst, cold and exposure—yet as he waits for his appointment with death, he is haunted by the shadows of his past misdeeds. Alone in the dark, he wonders if he has been forgotten . . . and if he has the strength to finish well.
Two men struggle against a determined emperor and the frailties of the human spirit in order to live out the Gospel of Jesus Christ and spread their message to the world.
CAST
Jim Caviezel (THE PASSION OF THE CHRIST)
James Faulkner (“Downton Abbey”)
Olivier Martinez (S.W.A.T.)
Joanne Whalley (“A.D. The Bible Continues”)
John Lynch (THE SECRET GARDEN)
Posted by Jesus Caritas Est at 8:12 AM