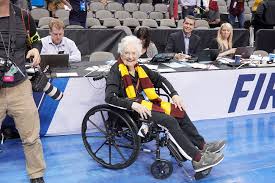 Sister Jean Dolores Schmidt needs no introduction. Sister Jean has become a national  sensation.Sister Jean Dolores-Schmidt, 98, has served as team chaplain for Loyola University-Chicago’s basketball program since 1994. Sister Jean, compiles scouting reports and supportive emails for the Ramblers every game. Her game day prayers are famous. Sister Jean was the chaplain for the men’s basketball team but also for a freshman dorm and the entire downtown campus.  A recent hospitalization has placed her in a wheelchair for now. Sister Jean has captured the hearts of millions. Her joy and holiness radiate through TV’s, radios and Twitter feeds.  According to a profile written in Loyola’s student paper, she was a coach for basketball, volleyball and yo-yo teams in elementary schools in Chicago, Los Angeles and North Hollywood: “In what Sister Jean calls the ‘olden days’, nuns weren’t allowed to go out after dark. When they had night games, Sister Jean’s teams would call the convent at halftime, tell her the score and ask her to pray for them.”

The University made her a Funny Music Video to SHARE!
Posted by Jesus Caritas Est at 3:17 PM