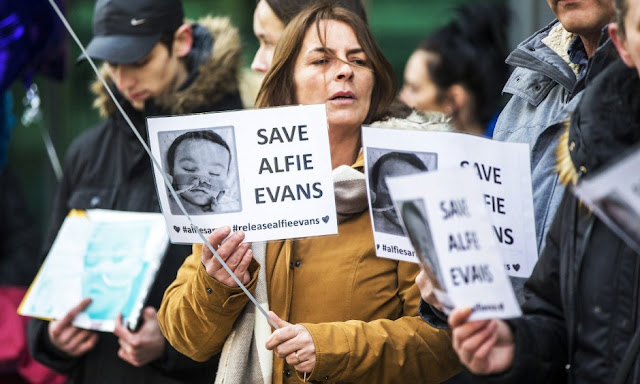 We are deeply concerned and outraged by the treatment and care offered to Alfie Evans.
Wanting to withdraw treatment so that he will die, the medical
authorities have taken Alfie to the High Court. At that point, and as a result of the hospital’s
court action, the parents were stripped of their right to be decision makers for their beloved
child. They could only advise the Court and look on as the High Court made decisions for Alfie.

The High Court decided that it was in the “Best Interests “ of Alfie to die and duly authorized
the withdrawal of treatment. As a result the parents are being tortured as they watch the
hospital take actions expected to lead to his death.

Despite a viable alternative being available (namely transfer by air ambulance for further
assessment to a specialist hospital in Rome), the hospital and doctors
responsible for his care insists that he remains under their care and on a pathway towards
death. While he now has some oxygen and some fluid this has taken huge effort to obtain for
him. He is offered sedation although (we understand) this has not been given at present.
Sedation (if given) would mean that he would develop respiratory failure and die even more
quickly.

Actions such as these have now brought the Alder Hey Hospital to worldwide attention and
by extension bring our whole profession into disrepute.

Medical tyranny must stop. Poor Alfie must not be killed in this way. We demand that the
authorities to allow Alfie safe passage to Rome.

With respect we insist that with immediate effect the GMC investigate the actions of doctors
providing his care. Surely the doctors should refuse to implement such a tyrannical decision
and allow Alfie to go to Rome.

We are inviting doctors to  cosign this petition. If you  wish  to  sign this statement please email secretary@medethicsalliance.org.uk
Posted by Jesus Caritas Est at 3:51 PM

Where is this taking place?