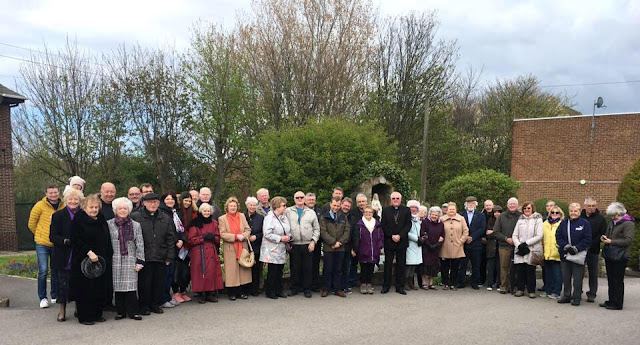 Thousands of Catholics prayed the rosary across the United Kingdom on Sunday, April 29, 2018. The event, is thought to have been the biggest Catholic gathering since the visit of Pope Benedict XVI in 2010. Over 400 groups prayed at sites along the British coast, and a few abroad. The crowds varied in size from single families to several hundred people at some locations. Priests, religious, Bishops and many families attended. It was sponsored by various high-ranking clergy and even members of Parliament.
“Rosary on the Coast encourages us to join with others in deep meditation on the mysteries of the Incarnation as seen through the eyes of Our Blessed Lady reminding us to look, as she does, with eyes of love on all creation in its diversity and richness, remembering that we are all equally held in Our Father’slove.  All the stages of life from birth to death are gifts of His Grace, to be cherished and enjoyed. O Holy Mother of God pray for us sinners, now and at the hour of our death.”The Most Rev. Peter Smith, LLB, JCD, KC*HS,Archbishop of Southwark,Roman Catholic Archdiocese of Southwark CIO
Lord Alton has sent his encouragement saying;
“The Venerable Father Patrick Peyton was known as the Rosary Priest. He famously said that  "The family that prays together stays together" and that  "A world at prayer is a world at peace". What was true then is true now – and Fr.Peyton would certainly be encouraging us all to take part in the Rosary on the Coast.”

MP Jacob Rees-Mogg
This is an extremely important initiative as the Rosary has been one of the most powerful forms of prayer since it was given by the Blessed Virgin to St. Dominic.  Pope St. Pius V, known as the Pope of the Rosary, established the Feast of Our Lady of the Holy Rosary and attributed the victory at the Battle of Lepanto 1572 to the intercession of Our Lady after he had asked all of Europe to recite the Rosary.  Many subsequent Popes have had a special devotion to the Rosary, including Pope St. John Paul II. Mr Jacob Rees-Mogg MP said;

With every good wish,

Yours sincerely,
Jacob Rees-Mogg
Press Release of FAQ by Rosaryonthecoast.co.uk
Why a Coast-to-Coast Rosary?

A coast-to-coast walk is generally a challenging and arduous journey, which takes preparation and courage. The coast-to-coast Rosary is no less this type of pilgrimage in praying for the spiritual wellbeing of our nations, at this time in the history of the British Isles. The Rosary is the most powerful weapon of choice (as it is Heaven's choice!) in which to pray for the healing and unity of our nations. 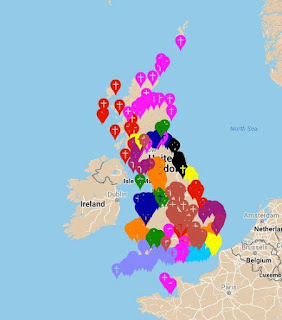 2. What was the inspiration?

Poland brought to the forefront of the Catholic world this powerful intercession of prayer to the Mother of God, bringing a simple but powerful spiritual witness of hope and healing where the words of the psalmist resonate “a pure heart create for me O God put a steadfast spirit within me”.  We desire to be steadfast in our fervent prayers for peace, our witness to the truth of the Gospel and our willingness to “cross the road” to serve our sisters and brothers especially the poor and the marginalised.
3. What have you learnt, if anything, from the Polish and Irish experience?

That with leadership and a common purpose the faithful people of a nation can come together in faith to witness to the reality that prayer can move mountains.

4. How many people are involved in the planning?
A team has come together from across the British Isles to facilitate a strategic framework of co-ordination and to enable good communication to dioceses and parishes.

5. What support do you have from the church?

The Coast-to-Coast Rosary is a lay inspired initiative, which is calling Catholics and all people of good will to join together in this act of prayer for the nations.

The Cardinal and many Bishops across Scotland, England & Wales are encouraging this initiative and the episcopal lead is Bishop John Keenan of the Diocese of Paisley in Scotland. The Rectors of the National Shrines of Our Lady at Carfin in Scotland, Our Lady of Cardigan in Wales and Our Lady of Walsingham in England have given their full support and encouragement.

Sunday April 29th 2018 at 3pm is the 5th Sunday of Easter. This date seemed to work logistically with everyone, taking into consideration Lent, Passion-tide, Easter and the Easter season. The date also happens to be the Feast of Our Lady of Faith and of St. Catherine of Siena.

Once the date was set we noticed that it followed two days after the tragic anniversary of the full implementation of the 1967 abortion act  (April 27th) thus pointing us to consider within the spiritual preparations for Rosary on the Coast the much needed prayers for healing and unity which needs to be made before God as individuals, as communities, as a Church and of course as Nations.

The British Isles has an ancient Marian heritage within it. England is known as the ‘Dowry of Mary’ and the Bishops of England will lead the rededication of England as the Dowry of Mary on the solemnity of the Annunciation 2020.  This Rosary on the Coast initiative is seen as part of the spiritual preparation for this rededication.

Our Lady’s spouse, St Joseph is Patron and Protector of the universal Church. In order to honour him and ask for his protection as spiritual father of the new evangelization we begin on his Feast Day of 19th March a 40 Day spiritual preparation which co-incidentally lasts until 27th April on which the Abortion Act of 1967 was brought into common law 50 years ago.

April 28th an invitation is extended for everyone to go to Confession.

7. What do you hope to achieve?

To witness to the power of prayer to change lives as we come together to ponder, like Our Lady, on the events of her Divine Son’s life reflected in the mysteries of the Holy Rosary, the compendium of the Gospel. To witness to the ancient and vibrant Christian history that is at the heart of our national story by praying and doing penance to bring unity, peace and healing to our troubled society.  We hope to contribute to the re-establishment of a culture of life in our nations through prayer and sacrifice. We hope to inspire a pro-life conscience among all peoples through a loving and compassionate witness.

8.      An Adventure of Evangelisation

"Our world is engaged in a fraught struggle over the meaning of the human person.  Aggressively secular anthropologies insist that nothing is really true or given in human nature, and the only lasting good for each human person comes about when they can choose everything about their identity from its very source.  It brings a radically new meaning to the idea of pro-choice because it seeks to lay hold on the very prerogatives of Creation itself.  Against this our Christian anthropology battles on proposing that God, in His loving plan of Creation, has already given us a nature that is best for us, so that our meaning and happiness are integrally linked to discovering, rather than inventing, the truth of who we are, and so entering its path to real dignity, freedom and peace.  Since this task is now, in our times, an adventure of evangelisation we need God’s supernatural assistance in grace and mercy, which the laity are beginning to cry out for in initiatives like the Rosary on the Coast, asking the Woman who was content to be the handmaid of God’s plan to be their intercessor and guide." - Bishop John Keenan

​
9.      Could you also forward me the contact details for the Scottish (and Welsh?) side?

We are all working as one Team. Some Team members prefer to remain in the background.