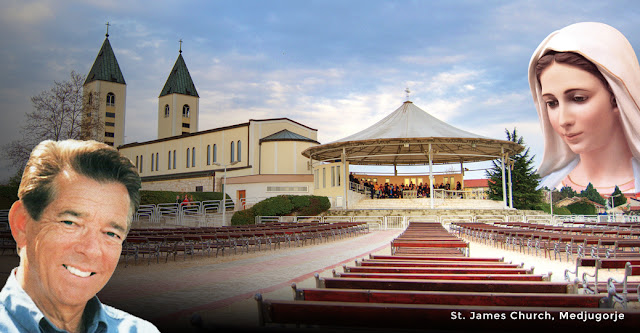 Wayne Weible has died in hospice. Wayne was the author of several books on Medjugorje and was converted after investigating the apparitions as a journalist. Wayne spent the rest of his life promoting Our Lady of Medjugorje and her message of prayer throughout the world. He was ill and placed in a hospice when he died. He was 80 years old. R.I.P. Wayne Weibel (June 26,1937-April 21,2018).His wife, Judith Weible, released this message on April 21, 2018 :

This morning Wayne passed away peacefully. Thank you so much for all your prayers and support. Just knowing you were with us in spirit during this difficult time made everything so much easier. May God bless Wayne’s soul and may he forever be in the presence of Jesus and his mother Mary.
Please pray for him and his family.
His many books often became best sellers - they can be obtained through his website:
https://www.weiblecolumns.org/shop/wayne-weible-s-books


BIOGRAPHY of Wayne Weible
In October 1985 Wayne Weible was a journalist and a Lutheran Sunday school teacher. During one of his classes on a topic for  modern day miracles someone mentioned what was happening in a village of
Supposedly, the mother of Jesus was appearing there to some children. Mr. Weible cared to know more as he was a columnist for four local newspapers. After class he inquired the person of where she had heard about this happening. He was directed to a friend who had a book and video of the appearances.
Mr. Weible's career training was to look for facts and verify news for reporting to the community. This career interest led him to follow-up for the information regarding the event that was said to be happening in Yugoslavia. He planned that it would make a good column for the Christmas season.
In a short time he read the book in curiosity. Nights later the video was watched by Mr. Weible and his wife,Terri. As he was viewing the video he shook his head and murmured over and over "This is incredible!" and believed the event was authentic.
Suddenly, while viewing the video, he "felt" an unexpected message within himself that was not audible. The message within himself was strong along with gentle and soft and said, "You are my son, and you are to do my Son's work. Write about the events in Medjugorje. Afterwards you will no longer be in this work (newspapers), for your life will be devoted to the spreading of the message." Feeling stunned and nearly in shock he sat up the entire night wondering and asking "Why me?". Mr. Weible felt totally unworthy and knew very little of spirituality. There was no doubt that the message was from the Blessed Virgin Mary. He responded to God in a hesitant "I'll try." The willingness of Wayne Weible to try has led to many conversions by spreading the messages of Medjugorje as according to God's will. Today, having answered the calling of Gospa, the Virgin Mary, Mr. Weible has written several books on the apparitions in Medjugorje. He has converted to the Roman Catholic faith and his publications and lectures at Marian Conferences have influenced the faith of Christians and the secular world.

Barbara said…
May Wayne rest in peace, and may Our Lady surround his family with her mantle.
I attended one of Wayne's talks when I was in my 20's & struggling with my faith. As I was leaving, Wayne stopped me and reached in his pocket, took out a Rosary and put it in my hand, and said, "Our Lady wanted me to give this to you" This totally turned my life around! Thabk you Waybe and Mother Mary!
April 21, 2018 at 1:41 PM

Ellen P said…
I am halfway through Wayne Weible's book on Medjugorge and knew he was blessed by God. I was in Medjugorge November 1 to 5 of this year, 2018, from a pilgrimage that started in Italy October 26. You can feel God in that Blessed Place and was blessed with a small miracle. I was hoping he was still living, but God has taken him to heaven with Him. God bless Mr Weible and his family.
January 1, 2019 at 11:41 PM

Unknown said…
I am a caregiver. One lady I care for in her home visited Medjugorje during the 80's. She showed me a picture of Mary holding her baby, Jesus which she took on the hill of apparitions. I feel drawn to learn more about the message of our Lady through Wayne Weible's book, Medjugorje. Please pray for my friend/person I take care of. She suffers from Parkinson's disease...
August 3, 2019 at 3:30 PM