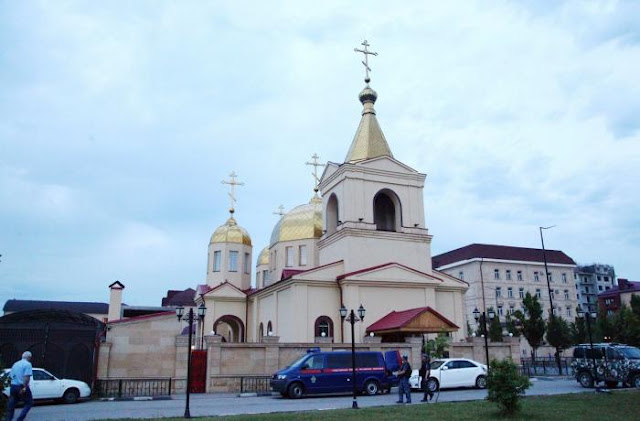 Armed with knives, incendiary devices and firearms, four terrorists stormed the church
of the Archangel Michael. One faithful and two policemen died. The Chechen president:
"The attackers received the order from a Western country".

Grozny (AsiaNews / Agencies) - The Islamic State (IS) has claimed the attack two days ago on
an Orthodox church in the Chechen capital, during which a faithful and two policemen were
killed, in a statement released online. A few days after the attacks in Surabaya (Indonesia),
the terrorist group has targeted another Christian place of worship.
Armed with knives, incendiary devices and firearms, four terrorists stormed the church of
Archangel Michael (photo) at around 3 pm, just before the evening function. The militants
tried to take some of the parishioners hostage. The attack was thwarted by security forces
who killed all four terrorists at the end of a brief shoot out, which took place outside the building.
Chechen President Ramzan Kadyrov, who arrived at the scene of the shooting, reported that
three out of four terrorists were from a country, while their leader came from Ingushetia.
The attackers were between 18 and 19 years of age. Citing "intelligence information",
Kadyrov said that "terrorists have received the order [to carry out the attack] from a Western
country".
A few hours later, mufti Ismail Berdiyev, president of the North Caucasus Muslim Coordination
Center, condemned the attack: "It was done during the holy month to destabilize the situation.
It is the month of Ramadan now. It is the moment when not only wars are forbidden, but even
vulgar language is banned ".
Vladimir Legoyda, head of the Synodal Information Department of the Russian Orthodox
Church, said the attack was "another attempt by pseudo-Islamic extremists to put Orthodox
Christians and Muslims against each other"
FULL TEXT from AsiaNews IT
.
Posted by Jesus Caritas Est at 11:07 AM