Pope Francis to #ROACO "All these make manifest the face of Christ’s Church, which proclaims the Gospel in action and in word, thus making present God’s charity for mankind." FULL TEXT 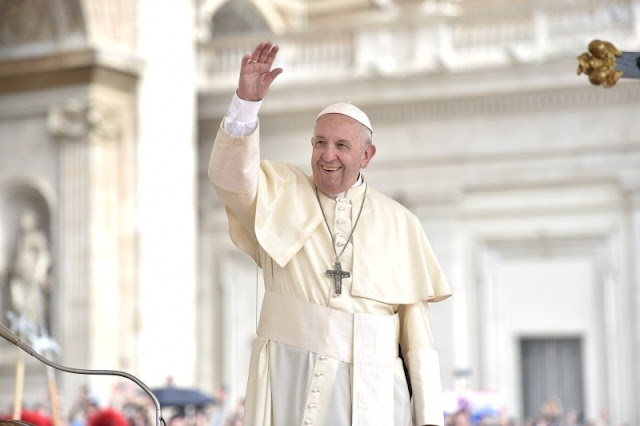 ADDRESS OF HIS HOLINESS POPE FRANCIS
TO THE PARTICIPANTS OF THE REUNION OF
AID AGENCIES FOR THE ORIENTAL CHURCHES (ROACO)
Consistory Hall
Friday, 22 June 2018
[Multimedia]

I am pleased to meet you at the conclusion of your Plenary Assembly, which this year coincides with the fiftieth anniversary of the establishment of ROACO. I offer a cordial greeting to Cardinal Sandri and I thank him for his words of introduction. My greetings and my appreciation go likewise to the Papal Representatives of the countries of the Middle East, who daily accompany the aspirations of Christians and people of other religious traditions in lands tragically marked by conflict and suffering. I also greet with gratitude the representatives of the Catholic agencies and the benefactors of the Congregation for the Oriental Churches, as well as all those who in the past have offered their services and are present for this important anniversary.
In the wake of the recent celebrations marking the centenary of the Congregation, ROACO now celebrates its own jubilee year. According to the Scriptures, every fiftieth year was heralded by the shofar, the horn that proclaimed the year of freedom for slaves, the cancellation of debt, the restitution of land, all based on the people’s acknowledgment of God’s gracious gift of the Covenant and of the land that was its sign. I invite you to think back with gratitude on the years that have passed, and especially on the faces of so many people – some of whom have already ended their earthly pilgrimage – that have worked in the Congregation and in your various agencies in support of their works of charity and assistance. The study of various projects and their financing, made possible by the generosity of so many of the faithful worldwide, has enabled the Oriental Catholic Churches, both in their native lands and in the diaspora, to carry forward their witness to the Gospel. That witness has been severely tested, often amid sufferings and persecution, first by the totalitarian regimes of Eastern Europe and then, more recently, by forms of allegedly religious fundamentalism and fanaticism, to say nothing of apparently interminable conflicts, especially in the Middle East. The concrete solidarity that you have shown has helped meet emergency situations resulting from wars and movements of migration, but above all it has helped ensure the very existence of the Churches, their activities of pastoral care and evangelization, and their social and charitable works. All these make manifest the face of Christ’s Church, which proclaims the Gospel in action and in word, thus making present God’s charity for mankind. Indeed, the “year of grace” of the Lord is always marked by liberation, both within the heart of sinful human beings and without, in the new life of the redeemed, which prefigures the new heavens and that new earth where justice will dwell.
Saint Peter, on the day of Pentecost, recalled the prophecy, so dear to me, of Joel: “I will pour out my spirit upon all flesh, and your sons and your daughters shall prophesy, and your young men shall see visions, and your old men shall dream dreams” (Joel 2:17). The Oriental Catholic Churches, as living witnesses to their apostolic origins, are called in a special way to protect and pass on a spark of Pentecostal fire. They are called daily to discover anew their own prophetic presence in all those places where they dwell as pilgrims. Beginning with Jerusalem, the Holy City, whose identity and particular vocation needs to be safeguarded beyond different tensions and political disputes, Christians, even though present as a small flock, draw strength from the Spirit for their mission of witness. Today that mission is more urgent than ever before. From the holy places, where God’s plan was fulfilled in the mystery of the incarnation, death and resurrection of Jesus Christ, may there come about a renewed spirit of strength to inspire Christians in the Holy Land and the Middle East to embrace their special vocation and to offer an account of their faith and their hope. May the sons and daughters of the Oriental Catholic Churches cherish their prophetic charge to proclaim the Gospel of Jesus, even in settings that are often even more secularized than in the West, where they come as immigrants or refugees. May they find a welcome, both on the practical level and in the Church’s life, as they seek to preserve and enrich the patrimony of their various traditions. These men and women, thanks also to your help, can bear witness to us, whose hearts are often dulled, that it is still worth living and suffering for the Gospel, even as a minority, or the object of persecution, for the Gospel is the joy and the life of men and women of every age.
Allow me to offer a final word of thanks and encouragement. Because of the work of ROACO, through the attentiveness and the acts of charity that sustain the life of the Oriental Churches, the Successor of Peter is able also to continue his mission of pursuing possible paths to the visible unity of all Christians. In the effort to extend a cordial and sincere hand to our most distant brothers and sisters, our sons and daughters are no less loved, and certainly not forgotten. With your help, they are always listened to and helped to continue their journey as the Church of the Risen Christ, amid every challenge, and every spiritual and material suffering, in the Middle East and in Eastern Europe.


Dear brothers and sisters, may God’s constant assistance always accompany you in your activities. To all of you I impart my Apostolic Blessing, which I extend to the agencies you represent, your families and the communities to which you belong. And I ask you, please, to please pray for me. Thank you.
FULL TEXT Official Translation from Vatican.va
Posted by Jesus Caritas Est at 9:47 AM