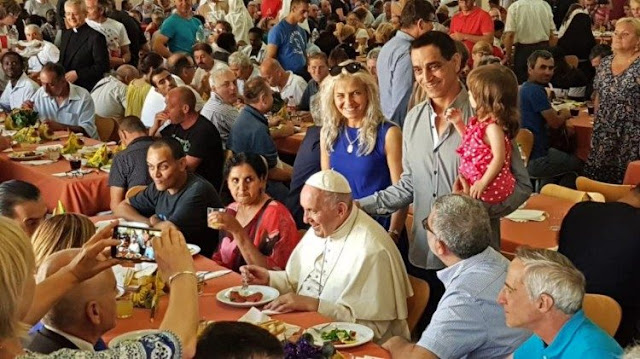 Pope Francis surprises poor and homeless at new cardinal’s dinner
As new Cardinal Konrad Krajewski, the pope’s alms giver, was treating the poor and homeless of Rome to a dinner Friday night, Pope Francis surprised them with a visit and joined their celebration as a guest. There was great celebration on Friday in the Vatican when some 280 poor people were invited to a dinner by new Cardinal Konrad Krajewski, the official almsgiver of the Pope, who was made cardinal by Pope Francis at the Consistory the previous day, June 28th.

Pope Francis surprised Cardinal Krajewski, his guests and volunteers with a visit and joined them at table at the Vatican employees’ canteen.  "I came for the poor, not for you," a smiling Pope told Cardinal Krajewski, popularly known as Fr. Corrado (instead of Konrad) to the poor he serves on behalf of the Pope.
The Holy Father dined with the poor and spent about two hours chatting with them as if in a family, listening to their stories that often told of suffering but also of hope.

There were about 60 volunteers serving dinner to the poor, including Carlo Santoro of the Community of Sant'Egidio of Rome, who collaborates with Cardinal Krajewki’s Office of Papal Charities, to assist the homeless in Rome.
"It was a specially warm visit because it was a dinner of the new cardinal with the poor,” Santoro said.  “To the surprise of all, the Holy Father arrived. We thought it was a simple greeting and he would be off soon,” he said.  The new cardinal turned to Santoro asking him to make room close to him for the Pope.
Santoro said the Pope greeted everyone with great affection.  At the Pope’s table were several Syrian refugees who had arrived through the efforts of  the Sant'Egidio Community.  One of them travelled to Rome with the Pope after his visit to the Greek island of Lesbos on April 16, 2016.  The man told the Pope he is now working and is integrated in Italy.

Santoro heard the Pope saying that several times in recent months he has met refugees from Lebanon and was struck by the fact that children were the first to speak Italian.  For the Pope, integration is fundamental which is not just welcome.  Where there is no job, the Pope said, there is no integration because without job there is no future.
Santoro said that at the table there was another refugee who narrated to the Pope how he arrived in Italy.  It was an 11-month journey through the desert, a journey full of dangers and pitfalls.  He has been in Italy for some years and he too has been integrated.
Another guest from Senegal, a Muslim, told him that this was the third time at a meal with the Pope.    He had been with both Pope John Paul II and Pope Benedict XVI for lunch, and this was the third time. Pope Francis jokingly told him, “Make a collection of Popes!”

Pope worry for children in Texas

The volunteer of Sant’Egidio Community noted the Pope was touched by and enjoyed the presence of children around him.  The Pope blessed a Syrian baby girl, born a few months ago, who was baptized on June 28.  Talking with the volunteers, the Holy Father expressed his worry over the issue of children being separated from their mothers in Texas, United States.
The Pope repeated that Europe was on the verge of suicide because by not accepting immigrants and not having children gave the continent no hope for the future.  He noted this worrying trend in other parts of the world, particularly in the US. Ex-prisoners, alcoholics

Santoro, the Sant’Egidio Community volunteer said the Pope also talked to some former prisoners, repeating something that he has often said: “But why not me?”, meaning he could have been in their shoes.
When the volunteers told Pope Francis the story of a homeless, alcoholic man, the Holy Father said, “Alcohol could affect any of us because it's an evil that kidnaps you, an evil that doesn't leave you, it's an evil that you can only get out of with the help of others.”  Our problem, even as a Church, is to help people come out of difficult situations and do so together, the Pope said.

The Holy Father was very moved to hear that many homeless people help the volunteers help others like them.  The Pope heard how during severe cold snap early this year, many a homeless helped in distributing blankets. SHARED from Vatican News
Posted by Jesus Caritas Est at 8:56 PM

Papa! Leading by example,vthe life of simple and humble holiness. God bless you.