#BreakingNews Bishops of Pakistan Support Pope Francis "We obey the Holy Father and we are with him." 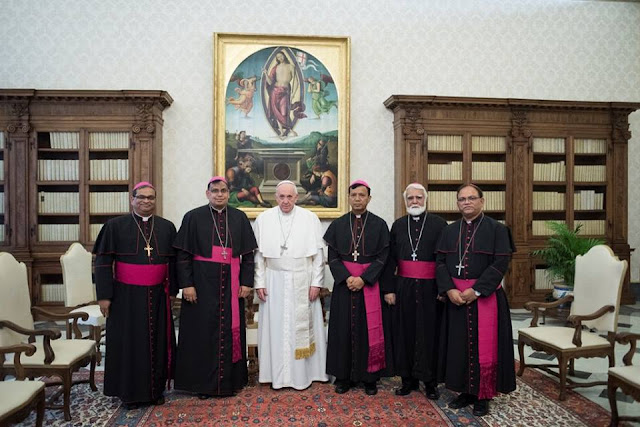 Sex abuse scandal: Pakistani Church supports Pope Francis
by Kamran Chaudhry
In a letter, a former apostolic nuncio to the United States accuses the pontiff of covering up the abuses of Card McCarrick. For Secretary of the Commission on catechesis, "sex scandals and accusations are things that concern the West." Christian researcher notes that “It will take a lot of wisdom to free the Church from these filthy accusations."
Lahore (AsiaNews) – The Catholic Church in the Islamic Republic of Pakistan has expressed its support for Pope Francis, who was accused last week of being aware and silent over allegations of sexual abuse within the US Church.
Speaking to AsiaNews, Fr Francis Gulzar, spokesman for the Archdiocese of Lahore, said that "We obey the Holy Father and we are with him. He is the true representative of Christ and we have confidence in his leadership of the universal Church. We do not possess the qualities to judge it."
In fact, “Christ himself knew that Judas was a traitor but did not say so until the time came,” the clergyman explained. “The same can be said about former Cardinal McCarrick.”
“Eleven disciples successfully completed His mission. At the same time, we must not ignore the Francis effect. An isolated incident cannot ruin his service and the good seeds [he sowed]. The world cannot lead the Church according to its earthly projects."
These comments follow a diatribe that is dividing the Church in the wake of the publication of an 11-page letter written by Archbishop Carlo Maria Viganò, former apostolic nuncio to the United States.
The missive contains serious charges against Pope Francis and the leaders of the American Church, most notably that of covering up the sexual abuses committed by Card Theodore McCarrick on young seminarians.
According to Emmanuel Neno, executive secretary of the Commission on the catechesis of the Catholic Bishops’ Conference of Pakistan, "sex scandals and accusations are things that concern the West. Similar issues are discussed openly in American talk shows. As a small Church in an Islamic environment, we cannot even imagine anything like it here." Referring to the appointment of Joseph Arshad, archbishop of Karachi, as cardinal, he said that “Francis gave us a cardinal after years of waiting and we are deeply thankful for his concern for smaller Churches".
For Asif Aqeel, a Christian researcher, Pope Francis inherited the pedophilia and sex abuse scandals. “Pope Emeritus Benedict XVI resigned after facing this challenge. Francis took revolutionary steps to match the pace in the 21st century. It will take a lot of wisdom to free the Church from these filthy accusations."
FULL TEXT Source: Asia News IT
Posted by Jesus Caritas Est at 10:28 AM