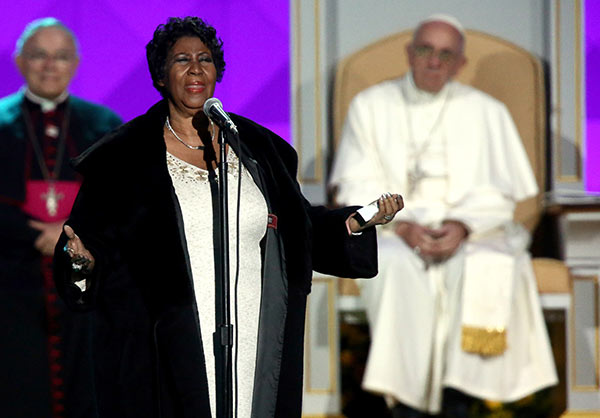 Aretha Louise Franklin was born on March 25, 1942 and died on August 16, 2018. She was a famous American singer and pianist. She began to sing as a child at New Bethel Baptist Church in Detroit, Michigan, where her father, C. L. Franklin, was minister. Aretha Franklin was born Memphis, Tennessee, to Barbara (née Siggers) and Clarence LaVaughn "C. L." Franklin.  Her parents both had children, three in total, from outside their marriage. Aretha's mother died of a heart attack on March 7, 1952. Franklin made her debut with the hymn, "Jesus, Be a Fence Around Me."At the age of 16, Franklin went on tour with Dr. Martin Luther King, Jr. and in 1968 sang at his funeral. Her debut gospel album, Amazing Grace, sold more than two million copies. Franklin was the mother of four sons. She gave birth to her first child at the age of 12, named Clarence after her father,on January 28, 1955. It is reported that, "The father of the child was Donald Burk, a boy she knew from school."On January 22, 1957, aged 14, Franklin had a second child, named Edward after his father Edward Jordan. Franklin's grandmother Rachel and sister raised the children but Franklin would visit them often.  Franklin's third child, whom she had with her then husband, Ted White Jr., was born in February 1964. Her youngest son, Kecalf Cunningham was born in 1970 and is the child of her road manager Ken Cunningham. Franklin was married twice. Her first husband was Theodore "Ted" White, whom she married in 1961 at age 19. Franklin separated from White in 1968, divorcing him in 1969.Franklin then married her second husband, actor Glynn Turman, on April 11, 1978 at her father's church. Franklin and Turman separated in 1982. Franklin's sisters, Erma and Carolyn, brother Cecil and half-brother Vaughn all died before her. She also had a half-sister, Carl Kelley (née Jennings; born 1940) is C. L. Franklin's daughter by Mildred Jennings. In 2017, during an outdoor Detroit show, Franklin told the audience to "keep me in your prayers". Franklin died at her home Riverfront Towers, Detroit, on August 16, 2018, aged 76. The cause was reported to be pancreatic cancer. Aretha won 17 Grammy Awards. Aretha Pope Francis in Philadelphia at the 2015 Festival of Families. Pope Francis came to Aretha after this performance of “Amazing Grace”. She explained; “I met His Holiness backstage. We shook hands and I curtsied,” Franklin said in the statement released by her publicist. “I gave him a boxed set of sermons by my father, theologian Rev. C.L. Franklin. He asked me to pray for him as he had asked others to pray for him during his appearances.” Please a Prayer for the Repose of her Soul....