#BreakingNews Cardinal Gracias says "...the Church in Asia is 100% on the side of Pope Francis” - Asian Bishops' President - 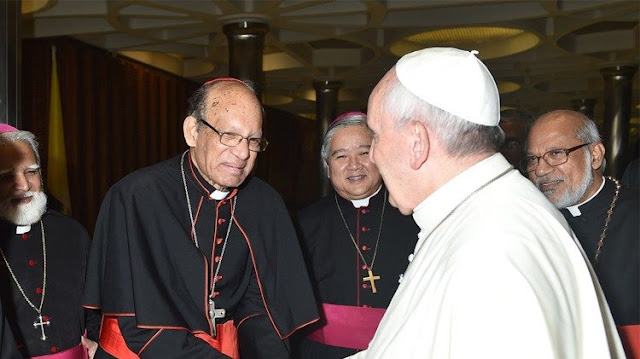 Card. Gracias on sex abuse scandal: the Church in Asia supports Pope Francis 100 percent
by Nirmala Carvalho
The head of the universal Church is accused of covering charges of harassment against a high-ranking US Church prelate. According to Card. Gracias, "the testimonies present many gaps". Then he adds: "We are grateful that Pope Francis has chosen not to answer".
Mumbai (AsiaNews) - "The Church in Asia firmly supports the Holy Father. As president of the FABC [Federation of Asian Bishops' Conferences], I reiterate that the Church in Asia is 100% on the side of Pope Francis” states Card. Oswald Gracias
The Archbishop of Mumbai and President of the Indian bishops, as well as the federation of the Asian bishops, was commenting on the scandal that has rocked the Universal Church and especially Pope Francis. Last week, returning from the World Meeting of Families held in Dublin, the Pontiff was accused of having been aware of the allegations of sexual abuse within the US Church and having been silent.
The accusation is contained in a 11 page letter written by Archbishop Carlo Maria Viganò, former apostolic nuncio to the United States. According to the Archbishop, Pope Francis covered up the sexual abuses committed by Card. Theodore McCarrick against young seminarians. "I know Msgr. Viganò - reports the Indian cardinal - He is an effective and highly respected member of the curia [of Rome] and of Washington. I am very surprised at his decision to make the issue public. "
The publication of the letter rekindled the diatribe between "conservatives" and "reformists" in the Catholic Church. "I'm really disappointed – continues Card. Gracias - This is not the way, it is not the approach [right approach to deal with such delicate issues]. And it does not help ".
The president of the Indian bishops, who is currently in Seoul to attend a forum for peace, adds: "There are many gaps in testimonies and there has been a clever use of words. Words are used with ambiguity. The testimonies are a coordinated effort to adulterate reality".
In conclusion he affirms: "I hope that his Excellency understands the damage he has done to the Church. I am sure that the Holy Father has drawn his conclusions on this dossier and we are grateful that the Vicar of Christ chose not to respond ".
FULL TEXT from Asia News IT

Anonymous said…
This scandal huge issue could only happen from American Catholicism. Look at how much scandal has been covered by FoxNews & CNN & MSNBC. Culturally making war and no one could be forever right in the eyes of the american catholic
September 4, 2018 at 4:52 PM