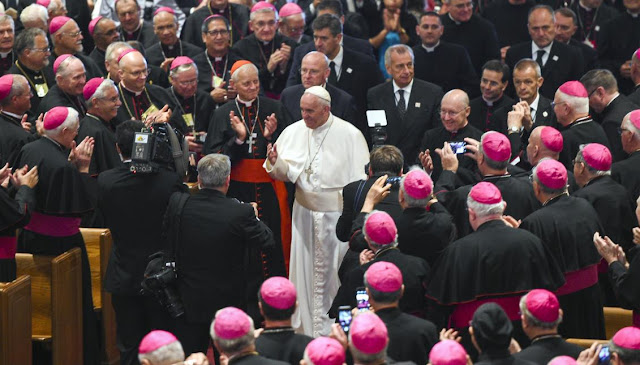 Pope: The Synod of Bishops at the service of the People of God
Less than a month from the beginning of the Synod of Bishops dedicated to young people, Pope Francis has published an Apostolic Constitution, “Episcopalis communio,” on the structure of the Synod, which was instituted by Pope Paul VI in 1965.
By Giada Aquilino
Consultation with the People of God, and a synodal Church in which the exercise of the Petrine primacy could receive greater light: these are some of the characteristic notes of the Apostolic Constitution Episcopalis communio (“Episcopal communion”), on the structure of the Synod of Bishops. The document is dated 15 September 15, less than one month from the beginning of the XV Ordinary General Assembly of the Synod, which has for its theme “Young People, the Faith, and Vocational Discernment.” For the good of the whole Church

After recalling how the Synod was established by Paul VI on that date, and describing the Synod as one of the “most precious legacies of the Second Vatican Council,” Pope Francis emphasizes the “efficacious collaboration” of the Synod of Bishops with the Roman Pontiff on questions of major importance; that is, questions which “require a special knowledge and prudence for the good of the whole Church.” In an historic moment, Pope Francis says, one in which the Church is led to a new “evangelizing stage” towards “a permanent state of mission,” the Synod of Bishops is called “to become an even greater channel” for the evangelization of today’s world.
The General Secretariat

Pope Paul VI had already foreseen that, with the passage of time, such an institution could be perfected. In 2006, the most recent revision of the Ordo Synodi (the regulations governing the Synod) was promulgated by Benedict XVI. In a particular way, the duties of the General Secretariat of the Synod – composed of the Secretary General and a special Council of Bishops – were established and gradually strengthened.

Solicitude of the episcopate for the whole Church

It is precisely in response to questions “that require the timely intervention and agreement of the pastors of the Church” that synodal action has been particularly effective. For this reason, the Pope says, there has been a growing desire in recent years that the Synod should increasingly become “a particular manifestation of the efficacious realization of the solicitude of the episcopate for the whole church.” This, he explains, is based on “the firm conviction” that all the pastors have been constituted “for service to the holy People of God, to which they themselves pertain in virtue of the sacrament of Baptism.”

Bishops, the Pope says, are at the same time “teachers and disciples,” in their duty, which involves their mission, but also their commitment to listening to the voice of Christ, who speaks through the People of God in such a way as to make them “infallibile in credendo,” infallible in believing. And so the Synod should also “become ever more a privileged instrument of listening to the People of God.” It does so by consulting with faithful of the particular churches; because, the Pope says, while the Synod is an essentially episcopal institution, it is nonetheless true that it cannot exist “separated from the rest of the faithful.” It is “an instrument suited to giving voice to the whole People of God, precisely by means of the Bishops,” who are “guardians, interpreters, and witnesses of the faith.” From Assembly to Assembly, the Synod reveals itself as an eloquent expression of the “synodality” of the Church herself, in which the communion of diverse cultures is reflected. The Synod shows clearly the “profound communion” between the Pastors and the faithful, and between the Bishops and the Pope, which exist in the Church.

Unity among all Christians

Pope Francis expresses his hope that the Synod might, “in its own way contribute to the restoration, of unity among all Christians, in accordance with the will of the Lord.” By doing so, it can help the Church “find a way of exercising the [papal] primacy which, while in no way renouncing what is essential to its mission, is nonetheless open to a new situation,” as Pope St John Paul said in Ut unum sint.
FULL TEXT SOURCE: Vatican News
Posted by Jesus Caritas Est at 12:58 PM