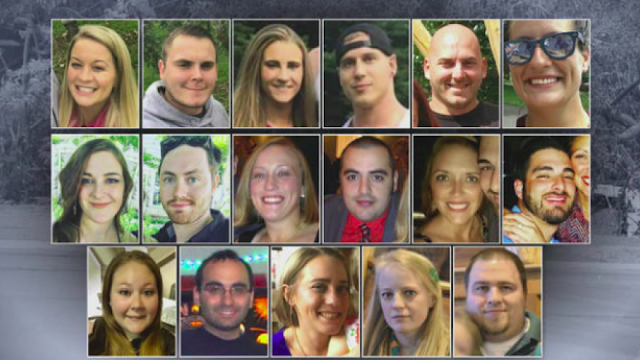 On Saturday, Oct. 6, in Schoharie, New York, a limousine crashed in Schoharie — which is about 40 miles west of Albany. In the crash 20 people were killed including the lives of 17 passengers, the driver, and two pedestrians. There were four sisters, brothers, and married couples.
Here are the names of the victims:
Amanda Halse, 26, and her boyfriend, Patrick Cushing, 31.
Erin, 34, and Shane McGowan, 30, had only been married five months.
Brian Hough and his father-in-law, James Schnurr, 70, were in the parking lot of the Apple Barrel Country Store when they were fatally struck by the limousine vehicle on Saturday. Brian Hough, 46,   left behind a wife, Jackie, and an 8-year-old son.
. Axel and Amy Steenburg, 29, were married in June.
Amy Steenburg's three sisters were also killed in the limousine crash, as was Axel Steenburg's brother and his wife.
Allison King, Abby Jackson, Amy Steenburg and Mary Dyson were all killed in the Oct. 6, 2018, limousine crash. Allison King, 31, was one of the four sisters traveling in the limousine.
Mary and Rob Dyson Mary and Rob Dyson, who were married. Mary Dyson, 33, was also one of the four sisters in the limousine. The couple had a 3-year-old son, Isaac.
Abby and Adam Jackson were among the 20 killed in a limousine crash in Schoharie on Oct. 6, 2018.
The oldest of the four sisters together Saturday, Abigail "Abby" Jackson, 34. Adam Jackson, 34, and Abigail had two children — 4-year-old Archer, and 16-month old Elle.
Rich Steenburg the older brother of Axel Steenburg, age, 34. He was the father of a 10-year-old daughter and a 14-year-old stepson. His wife, Kimberly, was also intending to join the birthday celebration, but chose not to do so Saturday because she felt ill.
Michael Ukaj The fateful crash that took Michael Ukaj's life came on his 34th birthday,
Amanda Rivenburg, 29, worked for people with disabilities.
Rachael Cavosie was 30.
Scott Lisinicchia, 53,  of Lake George, New York,
Matthew Coons, 27, and Savannah Bursese, 23, had been dating for the last two years.
Please pray for the Repose of their souls and their relatives they leave behind....