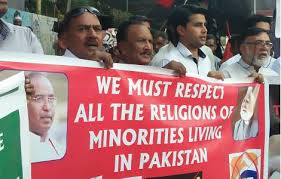 Karachi (Agenzia Fides) - A peaceful protest against the desecration of the Christian faith and Christian religious symbols was organized by Christians in Karachi who yesterday met in front of the Karachi Press Club. Those present pointed out to the institutions that millions of Christians living in Pakistan are been offended and hurt by recent publications on Pakistani mass media. As Agenzia Fides learns, the peaceful demonstration, led by the Archdiocese of Karachi and the National Commission for Justice and Peace (NCJP), began with a hymn declaring "The cross is a symbol of faith, strength, victory, glory, success and eternal life".
The protest broke out after the Express Tribune, one of the leading newspapers in Pakistan, in English, published a cartoon depicting the Crucifix, linking it to the increase in electricity prices. The cross was transformed into an electricity pole.
Fr. Saleh Diego, Vicar General of the Archdiocese of Karachi and Director of the Diocesan "Justice and Peace" Commission, at the head of the protest, told Fides: "We protest against the media for publishing derogatory images that offend the religious feelings of Christians.
The image of the crucifix in a satirical cartoon deeply hurts our religious feelings".
Fr. Diego also said: "All religious minorities in Pakistan congratulate the recent decision of the European Court of Human Rights which established that insulting the Prophet is not part of freedom of speech or expression. Equally all faiths enjoy the same respect and the same rights".
The Vicar adds: "The crucifix is a symbol of our faith. Our faith is not complete without the Holy Cross.
It reminds us of our Lord Jesus Christ and of the great sacrifice he has had for every person in the world. We start and end the day with the sign of the cross. We cannot tolerate being insulted".
The priest notes that "this is a second incident that damages the religious sentiments of Christians in Pakistan", recalling the promo of the new television series "Maria Bint-e-Abdullah", which will be broadcast on Geo TV channel (see Fides, 29/10/2018). "We ask the government of Pakistan to take severe action against those who promote hatred and violence and injure the religious feelings of the citizens of Pakistan", he concludes.
Meanwhile, the editorial team of the Express Tribune has issued an apology to its readers for the comic published "ensuring the utmost commitment to ensure that this material is no longer found in print, on the web and online version". Shireen Mazari, Pakistan's human rights minister, appreciated the newspaper's apology. (AG) (FULL TEXT Release by Agenzia Fides, 30/10/2018)