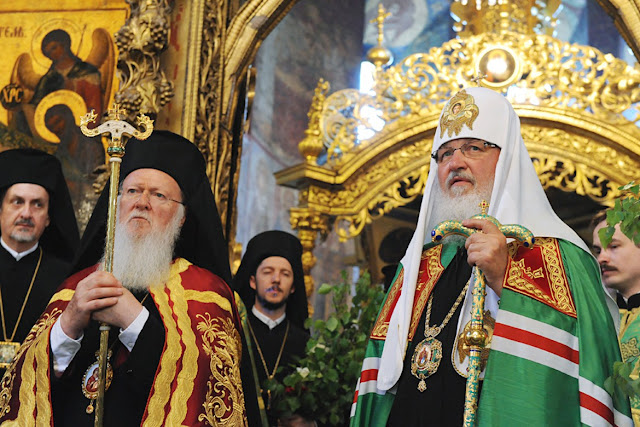 The Ecumenical Patriarchate postpones final decision on Ukrainian autocephaly
by Vladimir Rozanskij
The Synod of Constantinople confirms the will to grant it, perhaps in November. The condition: an agreement between the Orthodox traditions present in Ukraine. Kiev Patriarchate of Filaret and the Ukrainian Orthodox autocephalous Church, the "underground" community of Soviet times return to Orthodox communion. The statement of the Patriarchate of Constantinople and the exhortation to "avoid violence and reprisals". Moscow: A "catastrophic" decision.
Moscow (AsiaNews) - The Synod of the Ecumenical Patriarchate of Constantinople has postponed the concession of the Autochthonous Tomos to the Ukrainian Orthodox Church, while confirming its willingness to grant it. The final decision is subject to the agreement to be found between the various Orthodox jurisdictions in the country: the Moscow Orthodox, that of the Kiev Patriarchate of Filaret (Denisenko) and the Ukrainian Autocephalous Orthodox Church, the "underground" community of Soviet times, currently led by Filaret’s right hand man, Bishop Makarij (Maletič). Yesterday, Constantinople reinstated these last two Churches in full Orthodox communion. Here is the official text of the release:
Presided by His All-Holiness, the Ecumenical Patriarch, the Holy and Sacred Synod convened for its regular session from October 9 to 11, 2018, in order to examine and discuss items on its agenda.
The Holy Synod discussed in particular and at length the ecclesiastical matter of Ukraine, in the presence of His Excellency Archbishop Daniel of Pamphilon and His Grace Bishop Hilarion of Edmonton, Patriarchal Exarchs to Ukraine, and following extensive deliberations decreed:
1) To renew the decision already made that the Ecumenical Patriarchate proceed to the granting of Autocephaly to the Church of Ukraine.
2) To reestablish, at this moment, the Stavropegion of the Ecumenical Patriarch in Kyiv, one of its many Stavropegia in Ukraine that existed there always.
3) To accept and review the petitions of appeal of Filaret Denisenko, Makariy Maletych and their followers, who found themselves in schism not for dogmatic reasons, in accordance with the canonical prerogatives of the Patriarch of Constantinople to receive such petitions by hierarchs and other clergy from all of the Autocephalous Churches. Thus, the above-mentioned have been canonically reinstated to their hierarchical or priestly rank, and their faithful have been restored to communion with the Church.
4) To revoke the legal binding of the Synodal Letter of the year 1686, issued for the circumstances of that time, which granted the right through oikonomia to the Patriarch of Moscow to ordain the Metropolitan of Kyiv, elected by the Clergy-Laity Assembly of his eparchy, who would commemorate the Ecumenical Patriarch as the First hierarch at any celebration, proclaiming and affirming his canonical dependence to the Mother Church of Constantinople.
5) To appeal to all sides involved that they avoid appropriation of Churches, Monasteries and other properties, as well as every other act of violence and retaliation, so that the peace and love of Christ may prevail.
At the Ecumenical Patriarchate, the 11th of October, 2018
From the Chief Secretariat
of the Holy and Sacred Synod
Ukraine therefore remains at the moment without the much desired (and feared) Tomos of autocephaly, as was clarified immediately after the synod meeting one of its most influential members, the Metropolitan of Austria and Hungary Arsenij (Kardamakis). In reality, the document was not even on the agenda. One of the speakers, Daniel of Pamphilon, explained: "Everyone was interested in the Ukrainian question, there were many questions and answers. The report was considered, and there will be further discussions and evaluations", suggesting that the question will be taken up at the next session of the Synod (perhaps next month, in November). New consultations are also planned with the metropolitan of Kiev Onufrij (Berezovsky), head of the pro-Muscovite jurisdiction. In these days, Onufrij was hospitalized due to an illness caused by the stress of the question under discussion in Constantinople.
The intentions of the patriarch of Kiev Filaret (Denisenko) will also have to be verified, restored to his original "hierarchical state", which was actually that of metropolitan: the almost 90-year-old hierarch could claim for himself the leadership of the new autocephalous Church.
Moreover, there is great expectation for the reactions of Moscow and its patriarch Kirill (Gundjaev), certainly very annoyed by the forgiveness granted to his eternal enemy Filaret, but also relieved given the supplement of synodal evaluation of the matter. Given the interlocutory position of Constantinople, autocephaly is likely to be granted only after a conciliar assembly that brings together all the ramifications of Orthodoxy in Ukraine, if it is possible to convoke it without causing further conflict.
Hence the decision to establish a permanent home of the Ecumenical Patriarchate in Kiev, the stavropegion, and the recommendation to "avoid violence and reprisals", as already happened in the remote and near past of the religious life of this "border" country (in Slavic u-kraina).
The first reactions from Russian orthodoxy have not been amiable. In a commentary on television, Kirill’s spokesperson Aleksandr Volkov said: "Today the Patriarchate of Constantinople has made catastrophic decisions, first of all for itself and then for the Orthodox world. Constantinople has crossed the red line." Previously, Kirill had threatened the breaking of communion with Constantinople.
FULL TEXT Release from Asia News IT