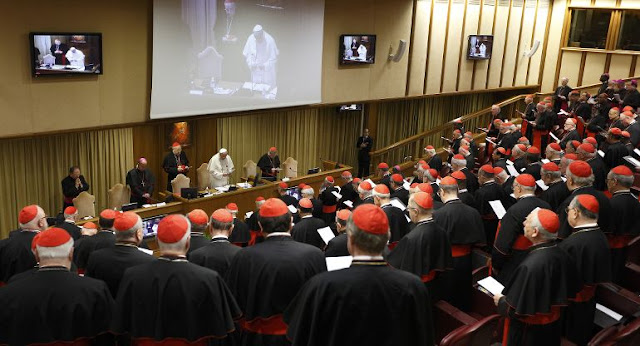 Synod of Bishops: Young people are used-less, not useless
At the Tuesday briefing for the Synod of Bishops on Young People, Cardinal Tagle from the Philippines said that the young women present with the bishops provided a much-needed expansion of horizons at the Synod.
By Russell Pollitt, SJ
The draft of the final document was presented to the Synod Fathers on Tuesday morning and was greeted with a long round of applause, Dr Paolo Ruffini Prefect of the Vatican Dicastery for Communication said. On Wednesday, the Synod Fathers will put forward proposals for integration into the final document. Dr Ruffini said that the document is different to the working document, the Instrumentun Laboris, but reflects many of the issues that were outlined in that document. He said that the icon for the entire document is the Scriptural account of the Road to Emmaus. He also said that a letter is being prepared and addressed to young people.
Wisdom and strength move us forward

Mr Joseph Sepati Moeono-Kolio, an auditor representing Caritas International and Oceania from Somoa, said the Synod has been an overwhelming experience. He said that it has been a time in which the Church has been reflecting on its engagement with the world, being acutely aware of the challenges the Church faces and proactively going out to meet those challenges. He said that the Synod spoke about Catholic Social Teaching and how to equip young people to go and use it in the world to face the issues that are before them.
Mr Sepati said that an image of the Synod for him from his own context in the Pacific region is an older wise person and young person in a canoe. The older person knows how to read the stars and navigate the oceans, the younger person has the strength to move things forward.

Cardinal Tagle said that this has also been a different Synod as the feminine voice has certainly been a focal point. He said that it was suggested often that female figures in Scripture should be used as interpretative lights for young people today. He said that the testimony of the young women at the Synod provided a much-needed expansion of horizons. The Cardinal said that when we talk about diversity it is not just about cultures but also the experience of women which is unique.

Archbishop Bienvenu Manamika Bafouakouahou from Congo said that he uses this image for the Synod: the final document of the Synod will be one that launches the bishops into orbit, like satellites, they in turn will give the signal back to young people on earth.
He said that in different parts of the world the issues were different for young people. For him, he said, migration is a real issue. Young people are looking for a better life but they are also driven from their homes, expelled from their land. This was caused, for example, by the degradation of the ecosystem at the hands of multinationals. He said that things like COP21 are often not adhered too despite all the promises made.
The Archbishop went on to say that another big concern is formation and education. He said that in Europe education was advanced but that in many African countries this is still a serious problem. Something must be done so that young people can grow and integral development can take place on the continent, the Archbishop concluded.

At the briefing Jesuit Father Antonio Spadaro spoke about a book that will be launched tonight at which Pope Francis will be present and answer questions. The book is entitled The Wisdom of Time and is aimed at bridging and connecting different generations. Fr Spadaro said that the Pope has been involved in the book in three ways: The Holy Father wrote the preface, he wrote about his own experience as an older man himself and then also contributed as a spiritual guide by commenting on the stories in the book.
Posted by Jesus Caritas Est at 11:14 AM