Latest from the Synod - "We must ask forgiveness" FULL Video 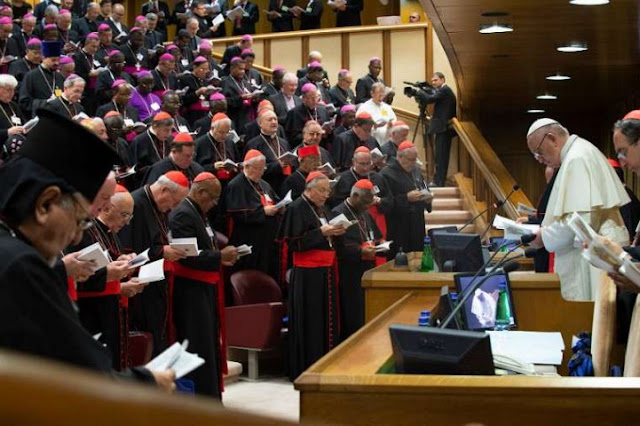 Synod of Bishops: We must ask for forgiveness
At Monday’s press briefing for the Synod of Bishops on Young People a bishop said that the Church must ask young people for forgiveness for the kind of world we have created.
By Russell Pollitt, SJ The Synod Fathers had Monday off while the first draft of the Synod document was being finalised. This draft will be presented at the General Assembly on Tuesday morning. The draft will be debated on Tuesday and Wednesday. On Thursday the Synod Fathers will have a day off while a final draft is being prepared. On Friday the General Assembly will meet to elect a new Council for the Synod and, on Saturday, the final document will be presented to the bishops. They will vote on the document paragraph by paragraph, each needing a two thirds majority to be included in the final document.
We must ask forgiveness

Bishop Paolo Bizzeti, S.J., from Turkey said that he has been thinking about the kind of world that has been created for young people. We have not prepared a livable world for young people where they can work, express themselves and use their talents. We have to ask young people for forgiveness, he said, for creating a world in which we have deprived them of so many possibilities.
The Bishop also said that what emerged for him at the Synod was the vast differences between the Church in affluent wealthy parts of the world compared to many impoverished places. He said that in impoverished places it is very hard to talk about faith and discernment when many young people from the ages of 8 or 10 are not able to choose because choices are made for them, often by the desperate conditions they find themselves in.
Conversion
We must change, we must take conversion seriously, so that we can become a better Church, said Fr Ángel Fernández Artime, S.D.B., General Superior of the Salesians of Saint John Bosco.  He said that young people have asked the Church to be brave and bear witness, to testify to the faith. He said that this was a call to all adults, not just to the clergy.
Ms. Henriette Camara, an auditor and member of the Catholic Scouts from Guinea, spoke about her conversion. She said that she came from a Muslim family. She came into contact with the Catholic Scouts and explained how, through this movement, she chose to convert. She says that she received a lot of support from them, she was welcomed without any discrimination and that her commitment to the Church with other young people has been a very meaningful experience. She also said that, even today, her mother is not happy that she chose to convert but she is still supported by the scouts.
Feeling fatherless and motherless
Bishop Bizzeti and Fr Artime said that they believe that motherhood and fatherhood is missing in the world. Fr Artime says that he meets young people who suffer from this lack of parenthood. He said that even in families that are conventional the pace of life is such that children are often not given the presence and accompaniment they need.
He went on to say that he believed that there is a weakness in the Church’s vision. The Church is not only present in parishes but in schools, shelters and other institutions and it is precisely in these that the Church can offer and help young people with a truly mature and healthy motherhood and fatherhood.
Local Synods Bishop Frank J. Caggiano from the USA, said that the work of the Synod has been to look at things from a universal level but that this now needs to be taken into local Churches. He said that Synodality doesn’t end now, it must be concretised in local areas. A big question for him, he says, is how he takes this forward in his own diocese. He said that he wants to bring young people in his diocese together so that they can put their heads together and find a way forward. He said that a diocesan synod or congress might be a way of taking the Synod forward. Bishop Caggiano said that young people have a unique contribution to offer the Church in the form of the technologies they use. Young people have expertise on the “digital continent” and that needs to become real missionary territory. He said that the young people at the Synod are ready to be sent and that it is his hope that they unleash a new energy and power in the Church. Young people best evangelise young people, the bishop said.
Commenting on the sexual abuse of minors Bishop Caggiano said that abuse was both a crime and a sin and that there is no place in the Church for this at all. We need to let young people know that we are committed to rebuilding our credibility and trust. The Bishops said that when trust is broken it is very hard to rebuild and needs to be done one person at a time. He said that that is something the bishops will address and must have a definitive way of dealing with in the future.
Posted by Jesus Caritas Est at 1:24 PM