Pope Francis at Agustinianum "Welcoming the immigrant is a biblical command 'because you yourself were an immigrant..." FULL Video 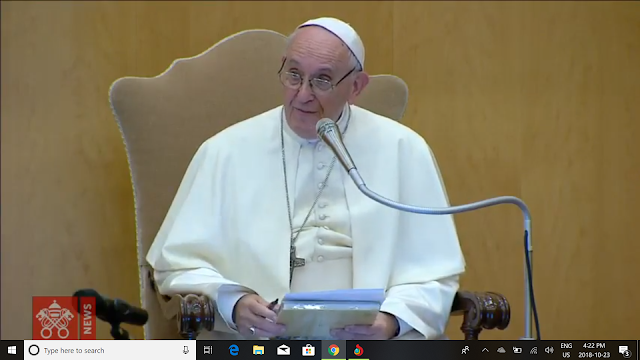 Pope Francis and “Sharing the Wisdom of Time”: an alliance between generations Pope Francis is asking young and elder people to join forces to make the world a better place. Answering questions during a book launch at the Augustinianum Institute in Rome, the Pope invited young people to listen and to bond with their elders in an effort to counter a culture of waste, a growing indifference to the plight of migrants and refugees, and a dangerous resurgence of populism that spurns hatred and intolerance.
The new book published by Loyola Press highlights the wisdom of the elderly, their experiences and their insights as fundamental contributions to society.
In the preface to the book, written by Pope Francis, he calls for an alliance between the young and the old to help counter the culture of waste.
At the book launch before a large crowd Pope Francis gave some comments:
“First of all, don't be afraid, don't lose your peace, always have peace by speaking with the Lord: 'We have transmitted faith and now' Be calm. Never try to convince because faith does not grow, the Church does not grow. Faith does not grow by proselytism, it grows by attraction. This is a phrase of Benedict XVI. This is to say it grows by testimony.”
Pope Francis went on to say:
“Welcoming the immigrant is a biblical command 'because you yourself were an immigrant in Egypt.' Let young people know how populism begins. There has been some harsh but very true words said, 'sow hatred.' We can't live by sowing hatred. What do I do when I see that the Mediterranean is a cemetery? I tell you the truth: I suffer, I pray and I speak. We cannot accept this suffering. We cannot say, 'one suffers everywhere,' and go on with our lives. No. This cannot be.”
The film director Martin Scorsese asked how to deal with the problem of evil in the world.
The pope offered him this advice. “Closeness, closeness works miracles, such as non-violence, gentleness, tenderness... These human virtues, which seem small, are capable of transforming the most difficult and terrible conflicts.”
Posted by Jesus Caritas Est at 4:24 PM