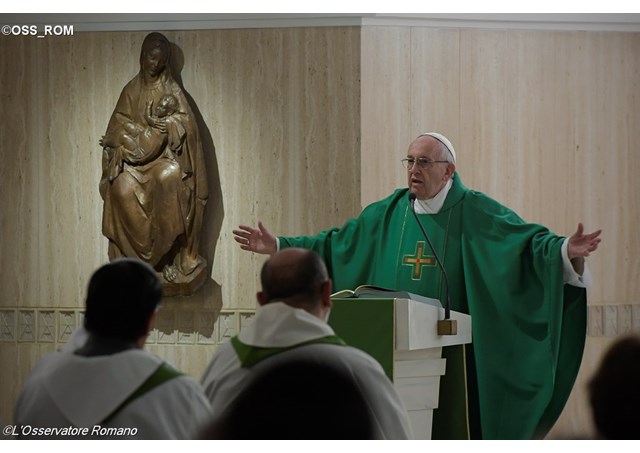 Pope at Mass: watch out against friendly, “well-mannered demons”

During his morning Mass on Friday Pope Francis spoke about how well-mannered demons can lead us to worldliness with guile and persuasion.
By Robin Gomes
Pope Francis celebrated Mass Friday morning at the Casa Santa Marta in the Vatican, saying that when the devil cannot destroy head on with vices, wars or injustices, he does so subtly with guiles, gradually leading people into the spirit of the world, making them feel nothing is wrong.
He was sharing his reflection on the day’s Gospel reading where Jesus drives out a demon who returns with other more wicked spirits to take possession of his old home.

Struggle between good and evil

When the devil takes possession of a person’s heart, the Pope said, he makes it his home not wanting to leave, and tries to ruin the person and harm him even physically.
The Pope explained that the struggle between good and evil in us human beings is the true struggle between the first struggle between God and the ancient serpent, between Jesus and the devil.
Warning that the devil’s purpose  and vocation is "to destroy the work of God", Pope Francis said that when the devil cannot destroy “face to face” because God is a greater force that defends the person, then he, cunning and "smarter than a fox", seeks ways to regain possession of that person.

Focusing on the Gospel episode where the demon returns after being cast out, the Pope said he very politely says he has returned when in fact he was thrown out.  Finding the home “swept and adorned", he brings along with him several other spirits worse than him, and they enter and make it their residence, and the condition of that person becomes worse than before.
The Pope said he make us feel comfortable that we are Christians, Catholics who go to Mass and pray.  We do have our defects, our sins, but everything seems to be in order.  Acting like a polite person the demon goes about to find a weak point and knocks at the door, saying,  "Excuse me? May I come in?" and rings the bell.   The Pope said these demons are worse than the first ones, because you don't realize they are at home.  They are the worldly spirit, the spirit of the world.
The Pope said that the devil either destroys directly with vices, wars or injustices or he does so politely and diplomatically the way Jesus describes.  Working silently, they make friends and persuade you on the road to mediocrity, making you "lukewarm" with worldliness.

The Holy Father thus urged Christians to watch out against falling "into this spiritual mediocrity, into this spirit of the world", which "corrupts us from within".  The Pope said he is more afraid of these demons than the first.
The Pope said said that when someone asks for an exorcist for a person possessed by a demon, he is not that worried, but he is worried when people open their doors to polite demons who persuade them from within as friends.
The Holy Father said he often asks himself  whether it is better to have a clear sin or to live in the spirit of the world.

According to Pope Francis the spirit of worldliness consists in carrying with us well-mannered demons.  In this regard he recalled Jesus’ prayers at the Last Supper: "defend them from the spirit of the world" - exhorting his disciples to be "vigilant and calm".
Pope Francis thus urged Christians to be vigilant and calm with these polite demons who want to enter the house as wedding guests.  “Christain vigilance”, the Pope said is the message of Jesus, that questions what is happening in the heart - why am I so mediocre; why am I so lukewarm; how many "well-mannered" people live at home without paying their rent?
FULL TEXT Release from Vatican News va