Wow Miracle Story about the Most Beautiful Church in the World - SHARE #LasLajas Sanctuary in S. America 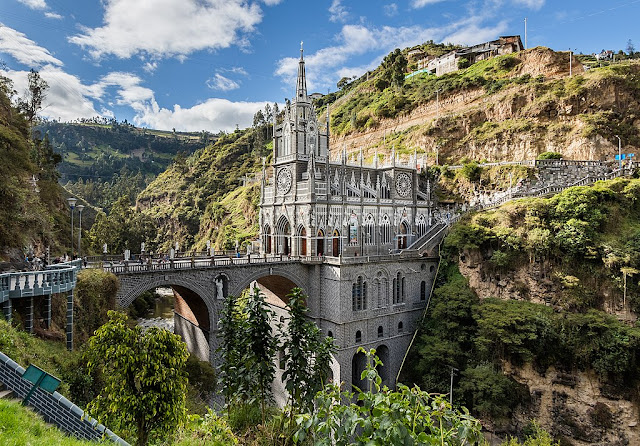 SHARE this Amazing True Story of the Most Beautiful Church in the World!
History of Las Lajas Sanctuary
The Virgin Mary appeared to a woman and her deaf-mute daughter in 1754 at the site of Las Lajas church. The Amerindian woman, Maria Meneses de Quiñones, and her daughter a deaf-mute, Rosa, took shelter from a storm in the cave. They felt  a force guiding them towards a cave, here they saw the image of Our Virgin Mary on the wall. It is believed that the apparition of the Virgin Mary cured Rosa.  The first shrine on the site was built a few years after the alleged appearance. It was reportedly originally built from straw and wood. In 1802, a larger shrine was built  and the worshipers erected the first version of the bridge connecting the church with the other side of the canyon. The Las Lajas Sanctuary was rebuilt between 1916 and 1949. All from donations from local parishioners. The church is 330 feet (100 meters) high from the bottom of the canyon. Many miraculous healings have been reported over the years and more and more people traveled to see the stone that had on it the image of Virgin Mary. Las Lajas Sanctuary received canonical coronation from the Vatican in 1952. And it was made a minor basilica in 1994.