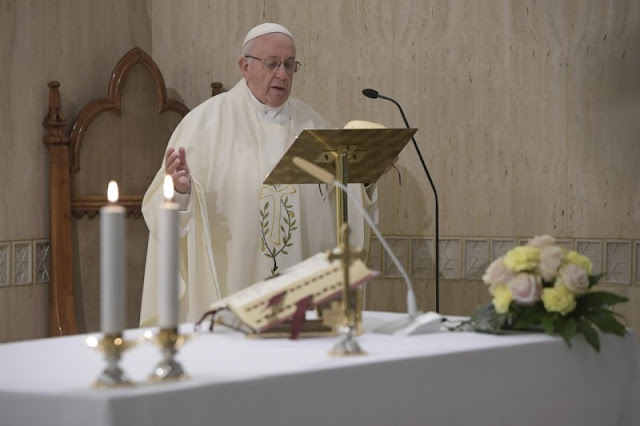 Pope warns against selfish ambition and conceit
Pope Francis celebrated morning Mass reminding Christians not to go through life simply by cultivating their personal advantage but by looking out for the interests of others, without expecting anything in return.
By Linda Bordoni
Pope Francis has warned that “rivalry and vainglory” have the power to destroy the very foundations of communities by sowing division and conflict. Speaking on Monday morning during the homily at Mass at the Casa Santa Marta, the Pope reflected on the Gospel reading of the day that reaffirms the importance of giving freely. Gratuitousness is universal, not selective The Pope explained that Jesus’ teaching is clear: “do not do things out of [self-]interest”, do not choose your friendships on the basis of convenience.

He said that reasoning on the basis of one's own “advantage” is a “form of selfishness, segregation and self-interest” whilst Jesus’ message “is exactly the opposite.”
And referring to the first reading in which St. Paul speaks to the Philippians, he urged the faithful to “do nothing out of selfishness or out of vainglory” but to humbly regard others as more important than themselves.
The Pope also mentioned the negative effects of gossip, which he said, stems from rivalry and is used to destroy others.
“Rivalry is ugly: you can perpetrate it openly, in a direct way, or with white gloves. But it always aims to destroy the other and to ‘raise oneself up’ by diminishing the other.” Rivalry, he said, stems from self- interest.
Conceit destroys communities Equally harmful, the Pope continued, is someone who prides himself on being superior to others.

This attitude, he said, destroys communities and families: “Think of the rivalry between siblings for the father’s inheritance for example”, it is something we see every day.

A Christian life is born from giving freely

Christians, Pope Francis said, must follow the example of the Son of God, cultivating “gratuitousness”: doing good without expecting or wanting to be repaid, sowing unity and abandoning “rivalry or vainglory”.
“Building peace with small gestures paves a path of harmony throughout the world” he said.
When we read of wars, he concluded, of the famine of children in Yemen caused by the conflict there, we think “that’s far away, poor children… why don't they have food?”
“The same war is waged at home and in our institutions” he warned, “stemming from rivalry: that’s where war begins! And that’s where peace must be made: in the family, in the parish, in the institutions, in the workplace, always seeking unanimity and harmony and not one's own interest.”
FULL TEXT Share from Vatican News va