Pope Francis Jesus "He is merciful, but He is also just. And if you close the door of your heart from within..." Homily at Mass 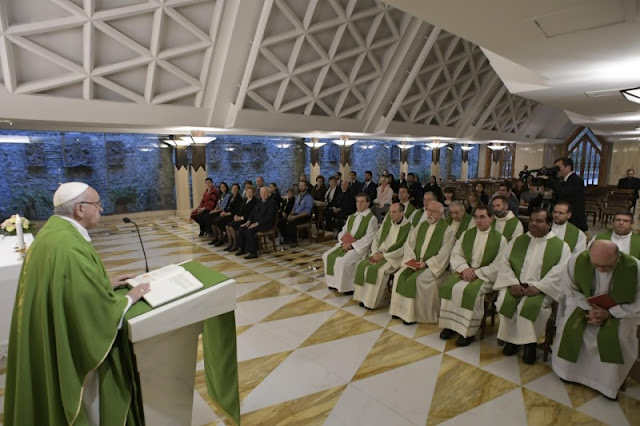 Pope at Mass: Jesus invites us to the banquet of the Kingdom
The Kingdom of God is often seen as a banquet. Jesus invites us to be with Him at the feast – but, the Pope asks, how often do we make up excuses in order to refuse His invitation? Jesus, Pope Francis says, is good, and offers us a second chance, but He is also just.
By Adriana Masotti
The day’s Gospel passage revolves around a banquet organised by one of the leading Pharisees, to which Jesus had been invited. The Gospel for Monday told how, at the banquet, Jesus had healed a sick person, and had observed that many of the guests sought to occupy the most prominent place. The Lord told His host that he should invite the most needy to dine with him, those who could not return the favour.

Tuesday’s reading continued the Gospel account of the banquet. At a certain point during the feast, one of those present had said, “Blessed is he who shall eat bread in the kingdom of God.”
Pope Francis described this as the passage of the double rejection. In the Gospel, Jesus responds with the parable of the man who gave a great banquet, and sent out many invitations. His servants told the guests, “‘Come: everything is now ready.’ But one by one they all began to excuse themselves.” There is “always an apology,” the Pope said. “They apologize. Apologizing is the polite word we use in order not to say, ‘I refuse.’”
And so the master then told his servants to “bring in here the poor and the crippled, the blind and the lame.”
This passage, the Pope said, ends with a second refusal, this one from the mouth of Jesus Himself: When someone rejects Jesus, “the Lord waits for them, gives them a second chance, perhaps even a third, a fourth, a fifth… but in the end, He rejects them”:
And this refusal makes us think of ourselves, of the times that Jesus calls us; calls us to celebrate with Him, to be close to Him, to change our life. Think about seeking out His most intimate friends and they refuse! Then He seeks out the sick… and they go; perhaps some refuse. How many times do we hear the call of Jesus to come to Him, to do a work of charity, to pray, to encounter Him, and we say: “Excuse me Lord, I’m busy, I don’t have time. Yes, tomorrow [today] I can’t…” And Jesus remains there.

How often do we invent excuses?

Pope Francis asked us to reflect on how often do we, too, ask Jesus to excuse us when “He calls us to meet Him, to speak with Him, to have a nice chat.” “We, too, refuse Him,” he said:
Each one of us should think: In my life, how many times have I felt the inspiration of the Holy Spirit to do a work of charity, to encounter Jesus in that work of charity, to go to pray, to change your life in this area, in this area that is not going well? And I have always found a reason to excuse myself, to refuse.

Jesus is good, but He is also just

Pope Francis said that, in the end, those who do not reject Jesus, and are not rejected by Him, will enter the Kingdom of God. But the Holy Father had a warning for those who think to themselves “Jesus is so good, in the end He forgives everything”:
Yes, He is good, He is merciful – He is merciful, but He is also just. And if you close the door of your heart from within, He cannot open it, because He is very respectful of our heart. Refusing Jesus is closing the door from within, and He cannot enter.

By His death, Jesus pays for the banquet

Finally, the Pope reflected on one final point: It is Jesus Himself who pays for the feast. In the first Reading, St Paul reveals the cost of the banquet, speaking of Jesus, who “emptied Himself, taking the form of a slave, humbling Himself to the point of dying on the Cross.” Jesus, the Pope said, “paid for the feast with His life.”
“And I say, ‘I cannot,’” Pope Francis concluded. “May the Lord grant us the grace to understand this mystery of hardness of heart, of obstinacy, of rejection, and [grant us] the grace to weep.”
FULL TEXT Source: Vatican News va - Image Share Vatican.va