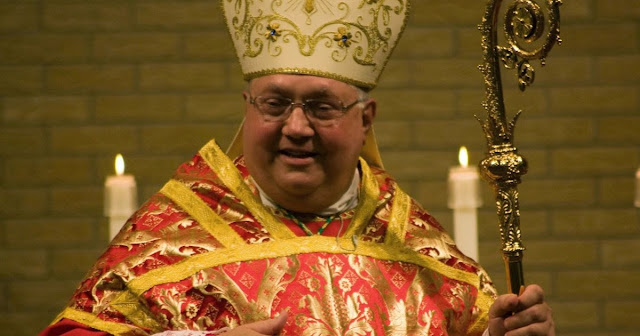 Diocese of Madison
Sunday, November 25, 2018
Media Release Bishop Robert C. Morlino, 4th bishop of Madison, dies at 71 (Madison) Sunday, November 25, 2018 –
The Most Rev. Robert C. Morlino, Bishop of Madison, died yesterday, Saturday, November 24th, at approximately 9:15 pm at St. Mary’s Hospital in Madison. He was 71 years old. Please pray for the repose of his soul, for his friends and coworkers, and for all of the faithful of the Diocese of Madison.
Information regarding funeral arrangements will be forthcoming.
As Bishop of Madison, Bishop Morlino’s three expressed priorities were: to increase the number and quality of the men ordained to the diocesan priesthood; to instill a greater sense of reverence throughout the entire diocese, especially through our worship of God, celebrated in the Holy Sacrifice of the Mass, and to challenge Catholic institutions in the diocese to live out their professed faith in Jesus Christ, risen from the dead, through their ministry in the secular community.
All objective indicators point to the fact that Bishop Morlino accomplished what he set out to do in the diocese, by the way of fostering greater priestly vocations (he ordained 40 men to the priesthood, with another 24 presently in formation), bringing a greater sense of reverent worship to the entire diocese, and he made significant inroads toward encouraging the Catholic institutions in his care to live out their mission with greater fidelity, during his fifteen-plus years as Bishop of Madison. We pray this continues.
Biographical Information
Robert Morlino was born December 31, 1946, in Scranton, Pennsylvania. An only child, his father, Charles, died while he was in high school, his mother, Albertina, in 1980. He was raised in Lackawanna County, Pennsylvania, graduating from the Jesuit-run Scranton Preparatory High School. He entered seminary for the Maryland Province of the Society of Jesus, and was ordained to the priesthood for that Jesuit Province on June 1, 1974.
His education includes a bachelor's degree in Philosophy from Fordham University, a master's degree in Philosophy from the University of Notre Dame, the Master of Divinity degree from the Weston School of Theology in Cambridge, Mass., and a doctorate in Moral Theology from the Gregorian University in Rome, with specialization in fundamental moral theology and bioethics. Father Morlino taught Philosophy at Loyola College in Baltimore, St. Joseph University in Philadelphia, Boston College, the University of Notre Dame and St. Mary's College, in Indiana. He also served as an instructor in continuing education for priests, religious and laity and as director of parish renewal programs. In 1981, Father Morlino became a priest of the Diocese of Kalamazoo and served there as Vicar for Spiritual Development, Executive Assistant and Theological Consultant to the Bishop, as Moderator of the Curia, and as the Promoter of Justice in the Diocesan Tribunal.
He served as administrator of a number of parishes, and as rector of St. Augustine Cathedral in Kalamazoo. Father Morlino was scheduled to begin a full-time faculty appointment as professor of theology at Sacred Heart Major Seminary in Detroit when, on July 6, 1999, Pope Saint John Paul II appointed him the Ninth Bishop of Helena. Bishop Morlino was appointed the Fourth Bishop of Madison on May 23, 2003 and installed on August 1, 2003. Bishop Morlino served as chairman of two committees within the United States Conference of Catholic Bishops (USCCB) - the Bishops’ Committee on the Diaconate, and the Ad Hoc Committee on Health Care Issues and the Church. He also served on the USCCB Bishops’ and Presidents’ Committee, which seeks to encourage the Catholic identity of institutions of higher education. Bishop Morlino served as Chairman of the Board of Directors of The National Catholic Bioethics Center (NCBC) which conducts research, consultation, publishing and education to promote human dignity in health care and the life sciences. He also served as Chairman of the Board of Visitors for the Western Hemisphere Institute for Security Cooperation (WHINSEC). This board was a federal advisory committee created by congress to maintain independent review, observation and recommendation regarding operations of the institute. For his service to the United States of America and his promotion of human rights education, the bishop was honored by the Department of the Army in 2009. In 2006, the national Alliance for Marriage joined with the Congress of Racial Equality to present Bishop Morlino with their Lifetime Achievement Award, for his promotion of the fundamental rights of Freedom of Speech and Freedom of Religion. In 2008, for his work in defense of the dignity of the human person, Bishop Morlino was awarded Human Life International’s Cardinal von Galen Award, named after the famous German bishop who worked actively against the Nazis. That same year, he also received the St. Edmund’s Medal of Honor, awarded to Catholics who have used their God-given talents in promoting the common good. In 2015, he was the recipient of the Relevant Radio Christ Brings Hope Award and earlier this year, he received the St. Thomas Aquinas College Medallion. Eternal rest grant unto him, O Lord, and let perpetual light shine upon him. May his soul, and the souls of all the faithful departed, through the mercy of God, rest in peace. ###
Posted by Jesus Caritas Est at 9:58 AM