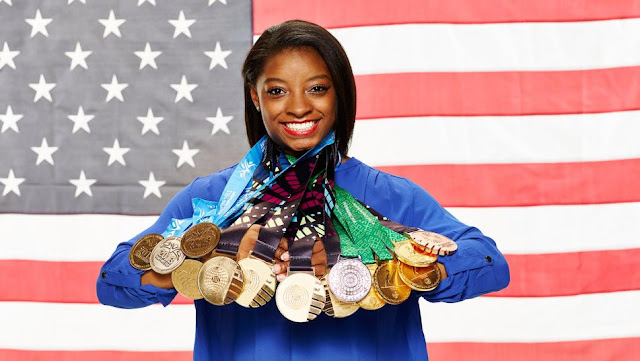 Simone Arianne Biles was born on March 14, 1997 and is an American artistic gymnast.  Biles is the first African-American to be world all-around champion and the first woman to win three consecutive world all-around titles. Simone Biles made history again, as the first American to win a medal in every event at the World Gymnastics Championship in Doha, Qatar, taking home six medals.  Biles dominated the 2016 Summer Olympics in Rio de Janeiro, earning five medals, including four golds.Biles also holds the record for most gold medals won by a female gymnast in the history. She also is a Faithful Catholic who never misses Mass and prays the Rosary. Biles explained,

“My mom, Nellie, got me a rosary at church. I don’t use it to pray before a competition. I’ll just pray normally to myself, but I have it there in case.”
Biles was born in Ohio her mother was battling drug and alcohol abuse and therefore at three she was taken away from her mother. Her grandparents in Texas adopted Biles and her younger sister. Biles calls her grandparents “mom and dad.”  At the age of 6, Biles started gymnastics. Her mother told the Washington Post, “she always had loved bouncing on furniture in the house, so much so that her mother, Nellie, had grown weary of harping that the sofa and chairs weren’t a playground.”  She trains at least 32 hours a week and is only 4'8.  She is homeschooled to give her more time for training.
SHARE this maybe you'll Inspire another young Athlete!
Posted by Jesus Caritas Est at 11:52 AM